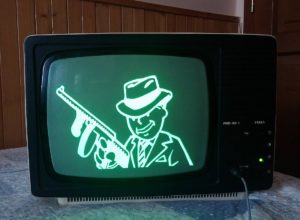 A scaled-down version of the Tesla 4160AB “Merkur”, the Tesla PMD-60.1 served its purpose as a display device to the Tesla PMD-85, an 8080-based 8-bit microcomputer. It shared the very same plastic case and electronics of the “Merkur” portable B&W TV; however, the analog tuner, signal demodulator, channel selector and the sound output stage were all missing in these models.  The predecessor version of this monitor, the Tesla PMD-60 (omitting the .1 marker) also shared the same white monochrome CRT with the “Merkur”, whereas the improved versions were equipped with a green phosphor-based screen. 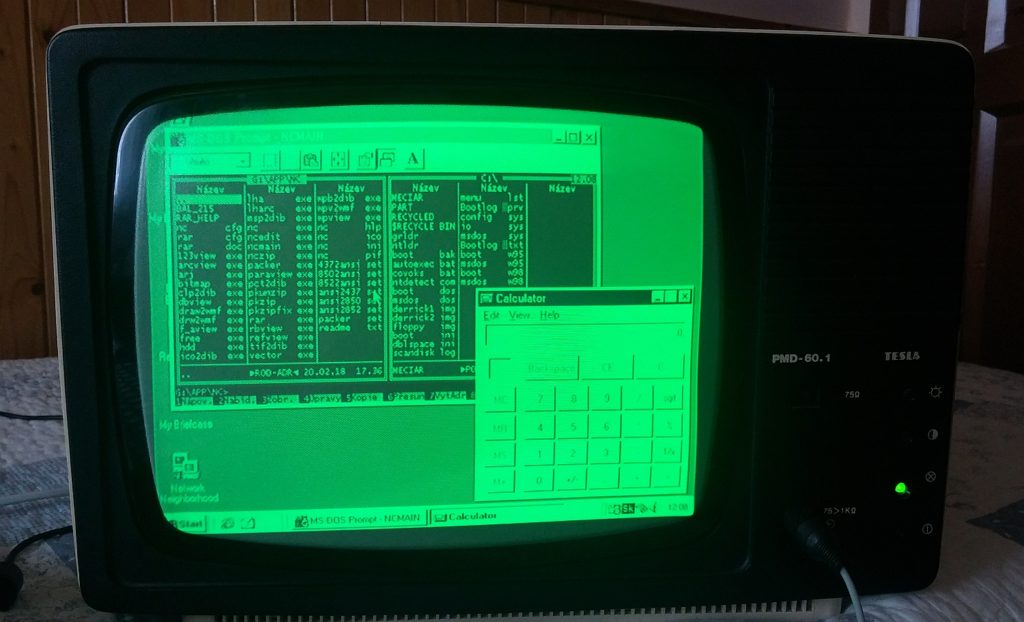 Windows 98 on the PMD-60.1 through a VGA-to-composite PAL video adapter

I’ve salvaged this particular piece from a scrapyard in a working condition, requiring minor servicing. It had a non-stable picture, with some skew and deformed geometry. This was easily fixed by carefully rotating the deflection coils on the neck of the screen, then followed by tweaking of the trimpots in the back, with some test patterns on the input, to restore the linearity and full-screen extents of the picture. I have also constructed a makeshift CRT screen regenerator to get the screen to its original brightness, without having the brightness pot tuned all the way up. 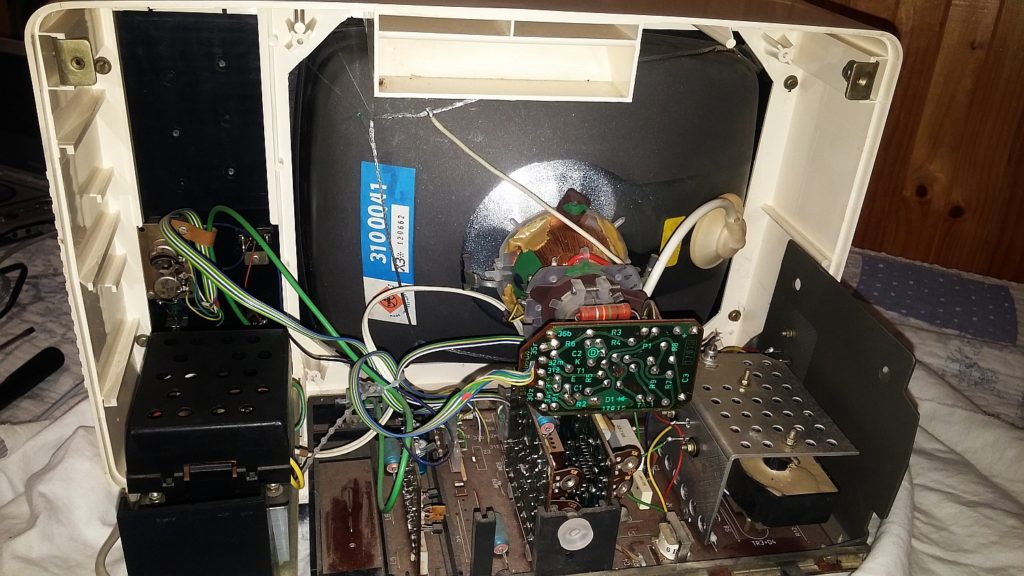 The internals. Notice the same mainboard and flyback transformer as in the “Merkur” 4160AB, with missing plug-in modules and no speaker.

The electronics of this monitor are wholly analog. The video preamplifier is done using discrete transistors. A TBA950 acts as a horizontal sweep generator and sync separator, whilst the vertical stage is based on an MDA1044E IC. These two modules contain accessible trimpots in the back, to adjust horizontal sweep and vertical sync frequencies, vertical size and linearity. Horizontal size can be adjusted using the variable inductor in series with the deflection coils, or by replacing the resonant capacitor in parallel with collector and emitter of the HOT. 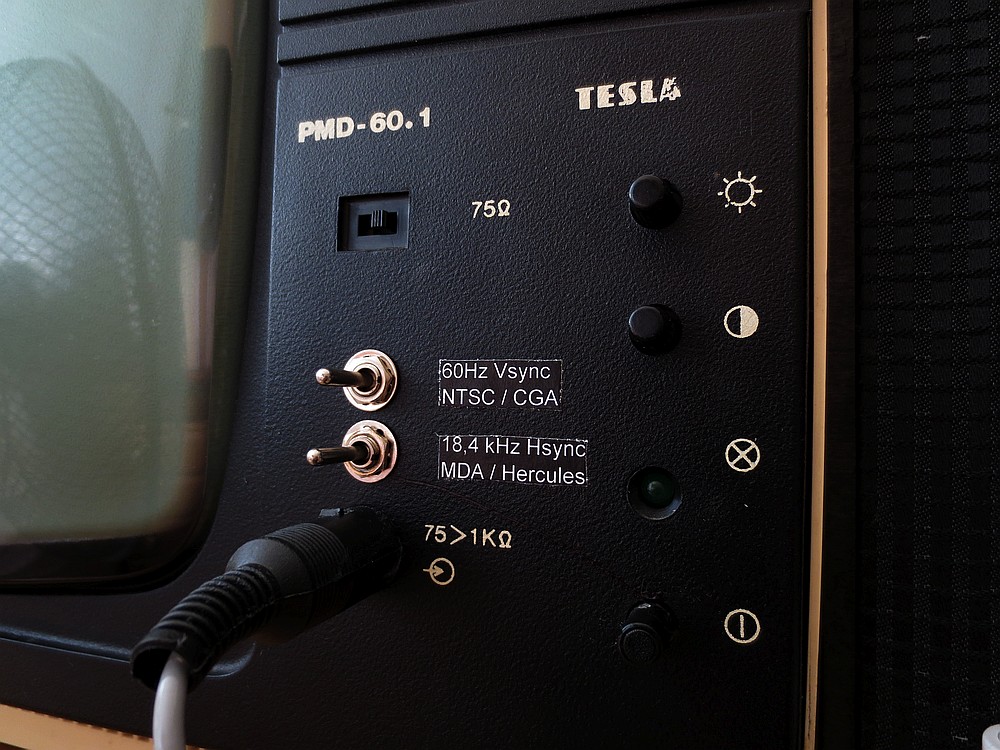 The monitor is designed to be fed a monochrome 15.625kHz/50Hz 625-line videosignal with negative composite sync, but the analog nature of the two stages can be tweaked to lock onto a videosignal with a 14 to 18 kHz horizontal sync, and 50 to 60 Hz vertical sync. The circuits can even be modified to accept external HSYNC/VSYNC, for example, from TTL outputs. As such, I’ve implemented two switches on the front panel of the monitor, to accept monochrome NTSC (CGA)  or IBM MDA/Hercules video output, with 18.43kHz HSYNC, through an appropriate TTL-to-composite integrator. The reason for me using the two switches is that I didn’t want to make any permanent changes to the electronics that would hinder the original operation of the monitor at 15.6k/50Hz. 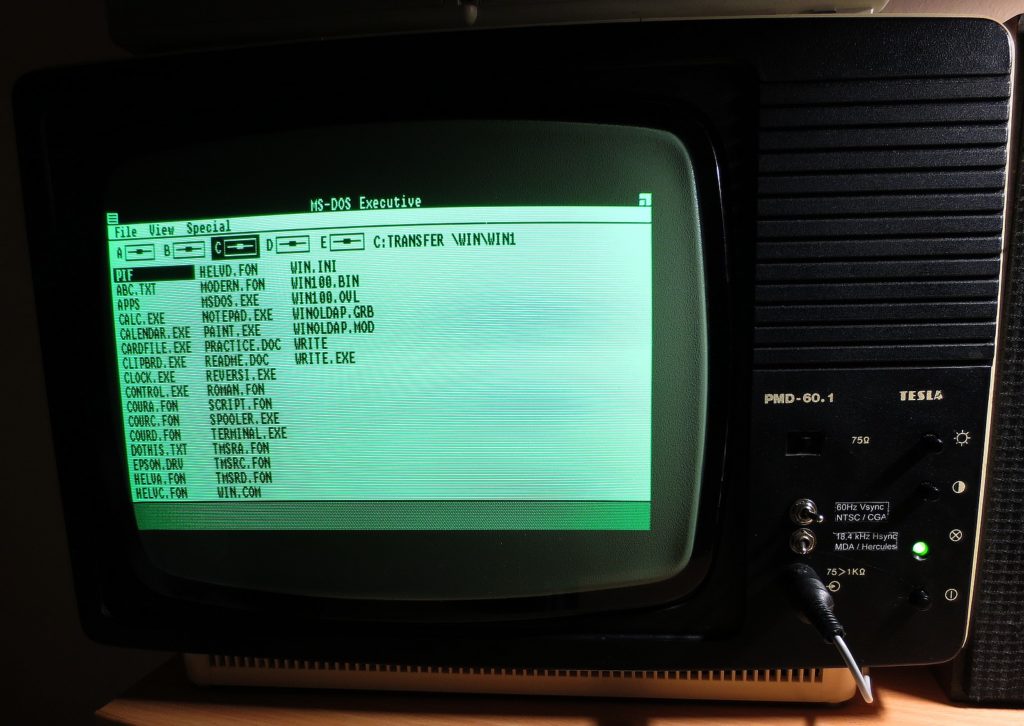 On +15.6kHz/+60Hz signal (a clone of the IBM CGA) from a TTL-to-monochrome composite integrator, running Windows 1.01

Of course, running the two output stages on different frequencies than they were originally engineered to, results in an image that can be warped, “egg-shaped”, visibly non-linear or otherwise broken. The two switches on the front panel thus operate two relay coils that switch between variable trimpots for the two stages, correcting the geometry. It was a messy wiring job, but it did the trick, and also made the changes reversible. 🙂 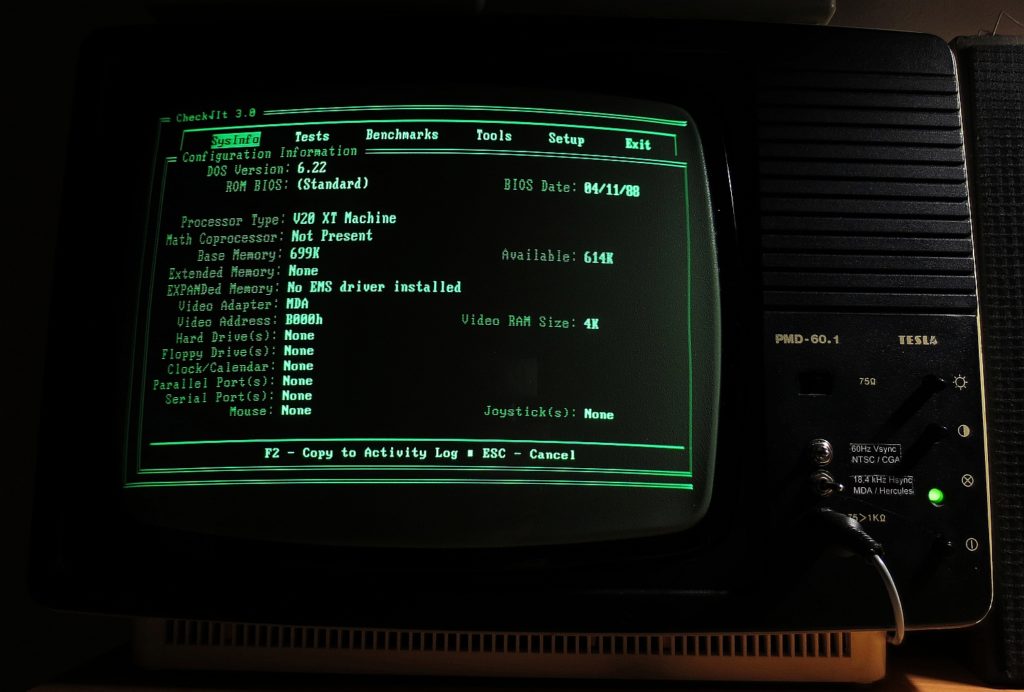 On +18.43kHz/-50Hz signal (a clone of the IBM MDA) from a TTL-to-composite integrator, running CheckIt on MS-DOS.
Notice the “high intensity” text.

On 18.43 kHz horizontal operation, there’s lower current flowing through the horizontal output transistor. Since there’s also a lower high-voltage output (which also results in a narrower image), the flyback transformer operates in this setup without any issues. However, the last three text columns are visibly “squished” – this can be corrected by altering the resonant cap between the C-E of the HOT, and also replacing the S-correction capacitor that compensates for the curvature of the screen itself.
The image is still visibly non-linear in the vertical axis, but I consider these simple “hacks” to provide an output picture that can be considered fair enough, at least when provided for free – without having to browse for expensive vintage monitors. 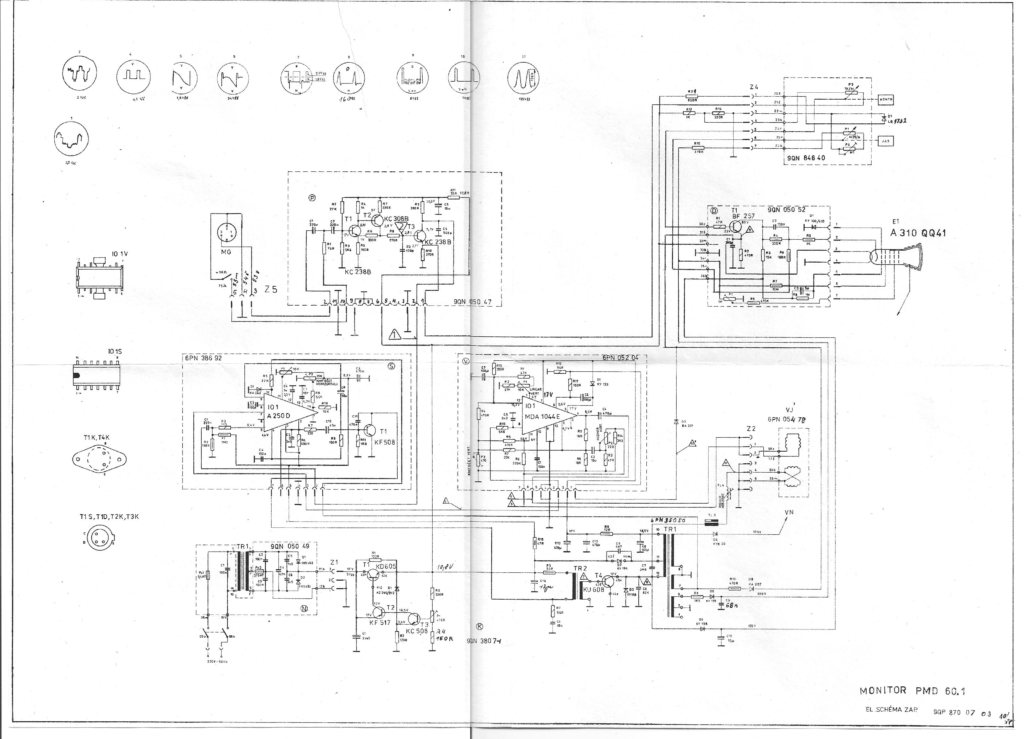