With a predictable demise of CRT screens that’ve been phased out of production since the late 2000s, the owners of vintage TVs, monitors or other displaying equipment, kept in a condition that’s just too good to be thrown out, will eventually bump into a problem concerning each and every CRT – or any vacuum tube in general – of decreased cathode emission, reducing its overall brightness. Fortunately, there might be a way to mitigate this, extending the usable life of the CRT by a few months, or even years. This is where a simple regenerator circuit steps in. 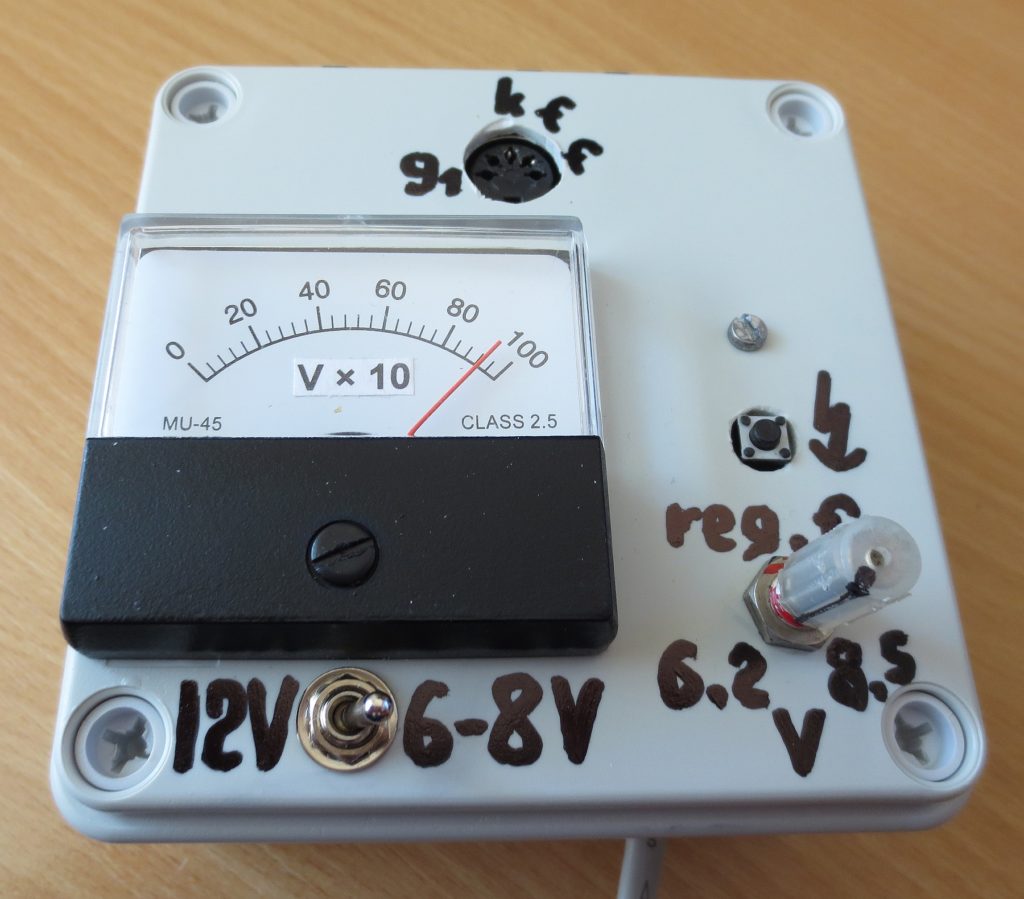 The circuit described here was originally published in a December 1978 edition of a Czechoslovak magazine “Amatérské radio” (Ham Radio) from an unknown author. Since then, it was in use for decades by repairmen and hobbyists alike. I have redrawn the circuit and made some improvements to it, to make it more versatile and reduce the possibility of damaging the CRT screen while performing the regeneration.
On a CRT screen that still has good vacuum and healthy phosphor coating, the most common cause of brightness decrease is a depletion of the barium oxide layer of the cathode, which results in reduced emission of electrons from the electron gun. In such a case, this depleted oxide layer can be blasted off the cathode, by means of high voltage, peeling it off and exposing the remaining non-depleted oxide layer. This is the basic principle of this regenerator circuit, and when successful, it can restore operation of the screen at nearly full brightness for some time.
Please note that this circuit works best with vintage CRT screens only (with a sufficiently thick oxide layer, where money haven’t been saved on). Preferably monochrome ones. It certainly won’t work with Trinitron screens, CRTs with depleted cathodes caused by a hack to permanently increase the filament voltage, or screens with a degraded phosphor – due to burn-in, or long term exposure to light, or similar.
Although there have been successful reports with “modern” color CRT screens; if you can – at first, try fiddling with the SCREEN potentiometer directly on the diode-split flyback, it might be as simple as that. Only when you start to observe horizontal retrace lines on the screen, you know that the CRT has gone weak enough for this experiment to have an effect. 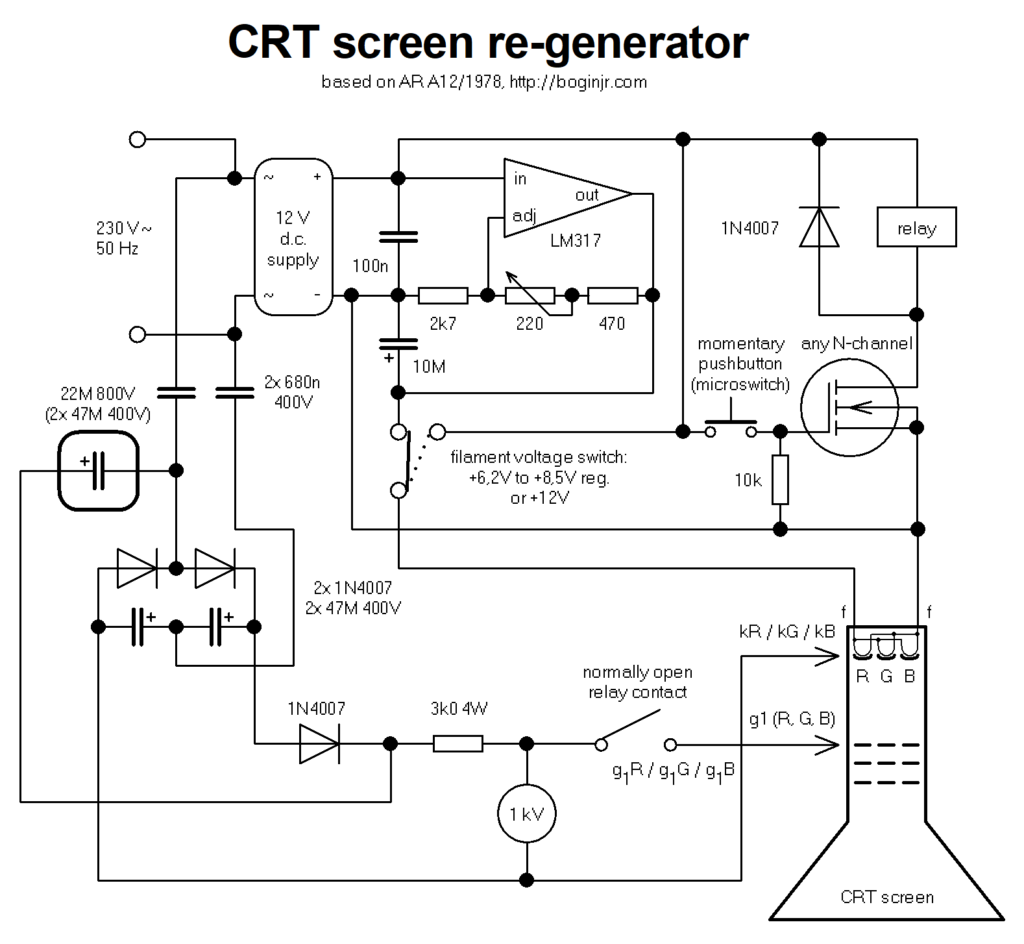 In this schematic, the CRT screen is connected like a vacuum diode – with the first grid (Wehnelt cylinder) acting as the anode. In case of connecting a color screen, you need to connect the particular cathode connection (red, green or blue) with a matching g1, and do the regeneration process for all three of them. You can also short all three cathodes together with the cathode input of the regenerator, and just connect the appropriate g1, to make the wiring simpler.
The circuit works as follows: There’s a regulated filament supply for the heater, consisting of a twelve volt d.c. supply that can provide at least 400 mA with some headroom, and an LM317 linear regulator (with a small heatsink) that brings it down, as most CRTs have a heater voltage of 6,3 volts. However, you might need to use a slightly elevated voltage during the process (see below). There’s a switch to bypass the regulator, providing a 12 volt heater supply for certain CRT screens with a filament voltage of 11 to 12 volts (like the one I’ve used below). The original 1978 schematic required the use of a mains transformer with appropriate taps, and a single pole, multi-throw switch, disallowing smooth filament voltage regulation.
High voltage supply for the first grid, which is required to disintegrate the depleted oxide off the cathode, is obtained straight from mains through a voltage tripler, consisting of a Delon bridge (a full-wave voltage doubler) with a super-imposed sinewave on the output, giving approximately +950 volts on output with no load.
The two 470n bipolar capacitors are used to limit the charging current of the capacitors used in the multiplier due to their AC reactance, and also they make the circuit DC floating, so the thing won’t draw short circuit current, should e.g. mains ground be inadvertently introduced to the regenerator. A 3k resistor of sufficient wattage is used to save the CRT internal connections (and also the relay contacts) from welding shut, in case of overcurrent or a hard short.
There NEEDS to be a momentary switch without latching, operating the high voltage output, because you will need to turn the g1 supply instantly OFF in case of overcurrent. I have made an improvement so you can use any small microswitch to do this. However, if you have a beefy push button (e.g. from a soldering gun, or similar) that will withstand the high voltage, you can ditch the transistor driving the relay coil and use it directly in series with the g1 supply. Also, with a relay in place, if your circuit is enclosed properly, the g1 supply won’t shock you when you disconnect the circuit from the mains, as the relay will only actuate with twelve volts on its coil, whether you push in the button or not. Of course, before fiddling with the circuit, be sure to discharge the capacitors.
The original design also used a small neon glow lamp with a voltage divider to indicate high voltage (or its drop) on output. It’s a much better idea to use a voltmeter though. Any d.c. meter, analog or digital, up to 1000 V, with an internal resistance of at least 10 megohms, will work. 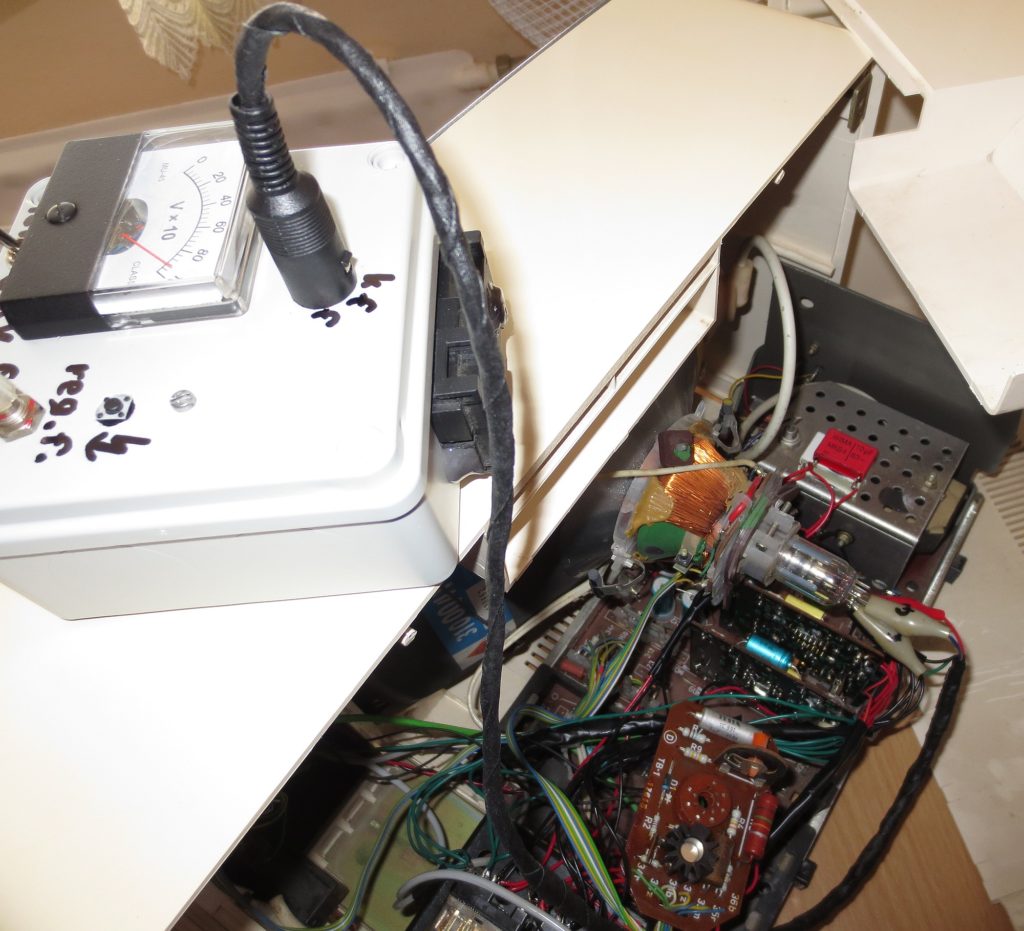 Regenerator in operation.
The circuit has been successfully used to restore full brightness of a “3100041” green screen CRT in a Tesla PMD-60.1.

Verify the circuit works as it should before proceeding with regeneration!
The filament voltage should be freely regulated between circa 6,2 to 8,5 volts, or direct 12 volts, depending on the switch. You should hear the relay actuate on button press and it should immediately disengage when you let go. If the circuit is plugged in to mains and idle, the meter should show 940 to 950 volts.

The regeneration process is as follows; in order not to destroy the CRT, be sure to read it thoroughly:

And that’s all, folks!
The circuit was used to restore full brightness of the Tesla PMD-60 monochrome monitor, whose screen was visible only with the brightness pot turned all the way up, and it’s still ticking like a clock. Should the screen in a Merkur get worn out one day, it will meet the might of this circuit 🙂