The Earth Computer Technologies’ EarthStation-I was one of the first x86-compatible thin clients, or “diskless workstations” if you prefer, made in the 1980s by a division of an Australian company Alloy Computer Products, stationed in Framingham, Massachusetts, USA. It was marketed as an IBM PC-compatible workstation, self-contained in a form-factor just a little bit bigger and thicker than that of a keyboard… of that era, at least. 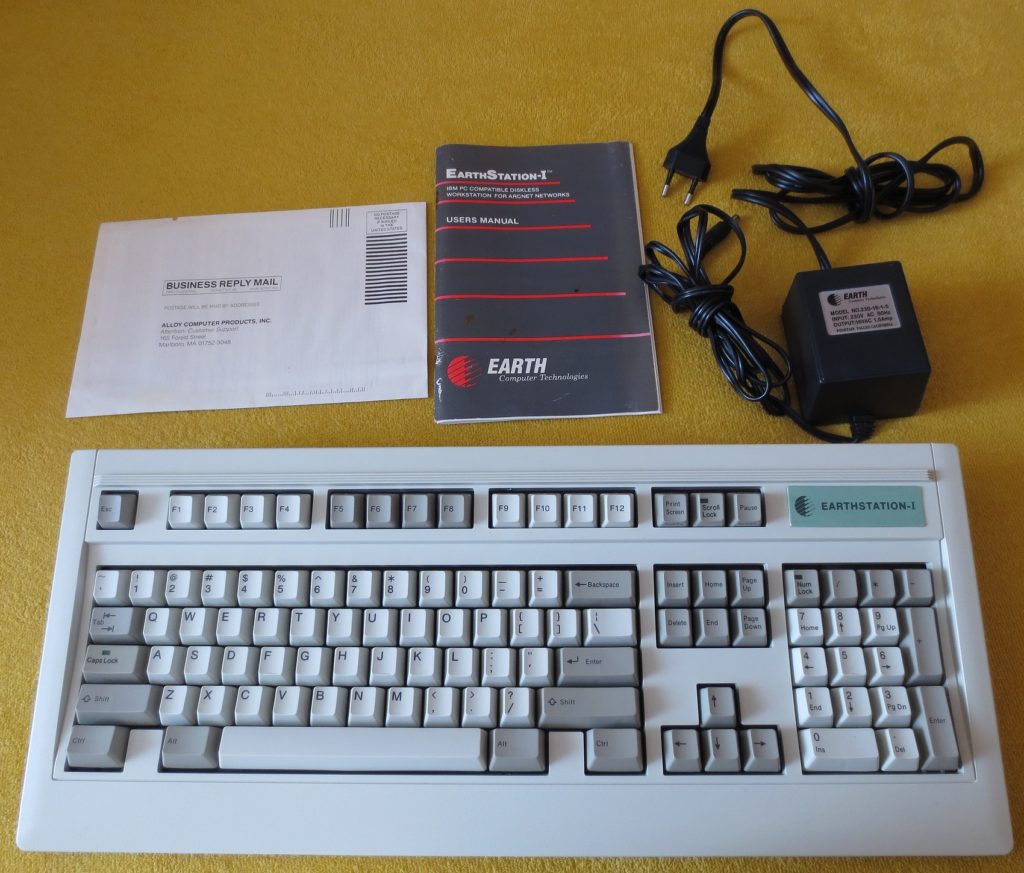 The EarthStation-I, with a mains adapter, instructions manual and a registration card

This form factor kind of reminds me of an 8-bit home computer, like the Didaktik M; however, inside we have a Japanese 80186 clone, the NEC V40, clocked at 8 megahertz, with 768k of RAM, an ARCnet client stack and a multi-purpose graphics chip on board… with a full-size, AT-style, 101 key proper “clicky” keyboard, to top it all off. I’ve got it all for ten bucks in a pristine and almost never used condition, inside the original box: even the plastics haven’t managed to fade into yellow, yet. And it was on sale for over $1,000 in 1991… only to have descended into complete obscurity shortly thereafter, together with the American divison of Alloy, which filed for bankruptcy in 1992.

So what was the purpose of this device, 35 years aback? A diskless workstation like this one, would have been connected to a central server through a network interface; thus saving on space, costs and resources that a full-fledged IBM PC, with a networking stack, would normally consume. The second advertised point was security: the machine contained no disk drives and zero provisions of ever connecting one. Thus, employees would be more motivated to work, since there are no games on our NetWare servers, and there also would be no threat of introducing any malware from an infected floppy, or company data being stolen by the employees, or anything of that sort. So, what do you think caused this “genius” business solution to end up forgotten in time?

Machine disassembled into its 3 main parts

Well, if you didn’t know the answer to my previous rhetorical question, here it is, right above you. Yes, the machine contains a CPU, a GPU, socketed ROM and RAM chips, a keyboard controller, a network stack chip, two chips to support the UART RS-232 and parallel interfaces…. and that’s about it, folks! The rest of the chips are just TTL glue logic to make it all work. There is no standard or accessible system bus to update or upgrade the machine, in any way. And this was intentional! Heck, even the architecture didn’t follow the ISA standard of that time… The only two things that you could upgrade this machine with, is filling up the RAM sockets to a maximum of 768k (which had been already done), and perhaps including a custom boot ROM, if you weren’t using NetWare, by chance.
Endut. Hoch hech. And with a CPU that’s only a little bit faster than an 8088, in the year of 1987? Damn, this thing must have sold well. 🙂

To be honest though, this wasn’t the only EarthStation, made by Alloy, on the market. Did you deprecate ARCnet in your company, with your network stack being replaced with Ethernet? Then you’d need a brand new EarthStation-Ie. For another thousand dollars or two. No such thing as replacing a network interface card and a driver on a client machine that, in case of a PC, would the scenario normally be. Or, the V40 CPU being too slow for you to do even basic text-mode administration tasks? Well, there were the 286 (or 386) variants of the EarthStation that followed, with a very similar “architecture”. By this time, the system was split between the keyboard and a “satellite box” that was a necessity to use. Huh. It stops being compact any longer. Oh crap, the first laptops are starting to appear… 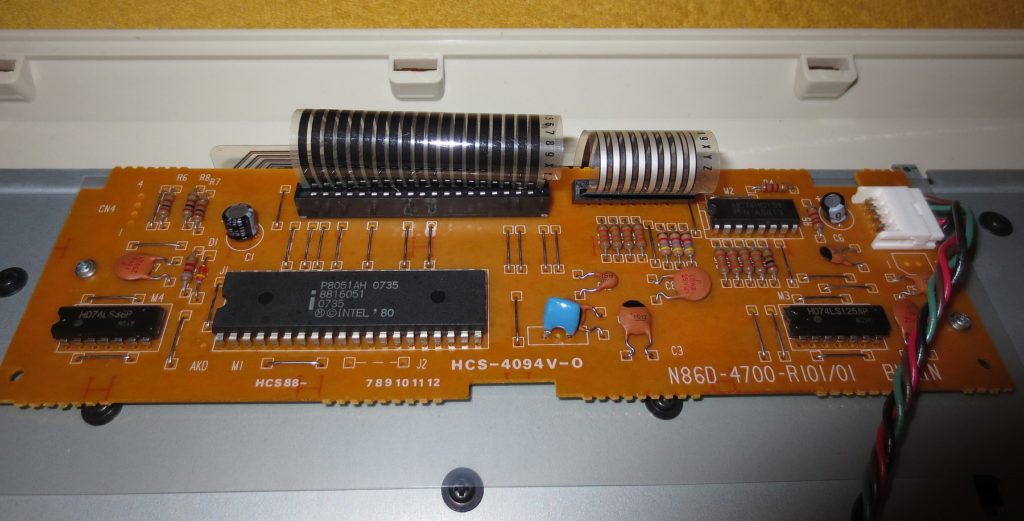 And now to get into the more juicy stuff! Yes, the machine was destined to be obsolete and forgotten, but there are a couple of interesting quirks that can be observed. First thing is: the machine doesn’t necessarily need to boot from the ARCnet stack: it can be made to boot and share data with any DOS machine (of that era) through a boot ROM code through a parallel cable (or even serial, if desired). Which is more convenient than setting up a full-fledged Netware 2.1 server with network boot capabilities, mind you.
And also if ARCnet is not used, the 64K memory hole used by the network stack, can be used to hold a compact boot disk image in memory, and still have 704K free to be used by DOS. Not bad for an improved 8088, eh? 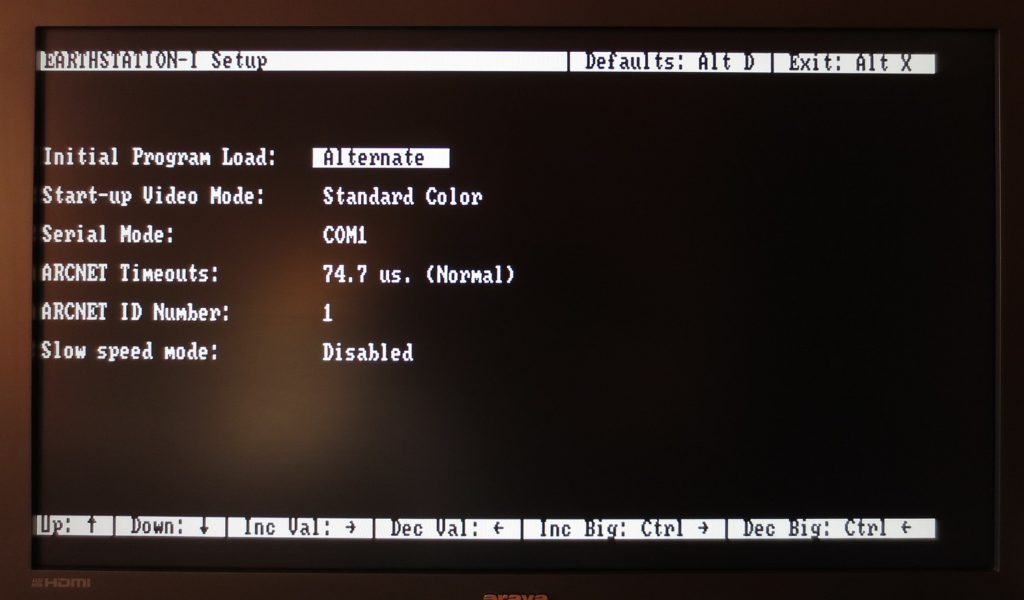 BIOS settings in CGA mode. The machine is connected to a modern TV through a TTL-to-composite adaptor. Sadly, no direct CGA composite output here

And since the CPU is a NEC V40, it can keep on clocking a little bit faster than a standard 8088 would, but it can be underclocked to the basic 4.77MHz speed of a classic IBM PC, if required. But these V40s can also be switched to a special Intel 8080 emulation mode, through a couple of special opcodes. Fancy running CP/M or programs made for the PMD 85, on an x86-compatible? 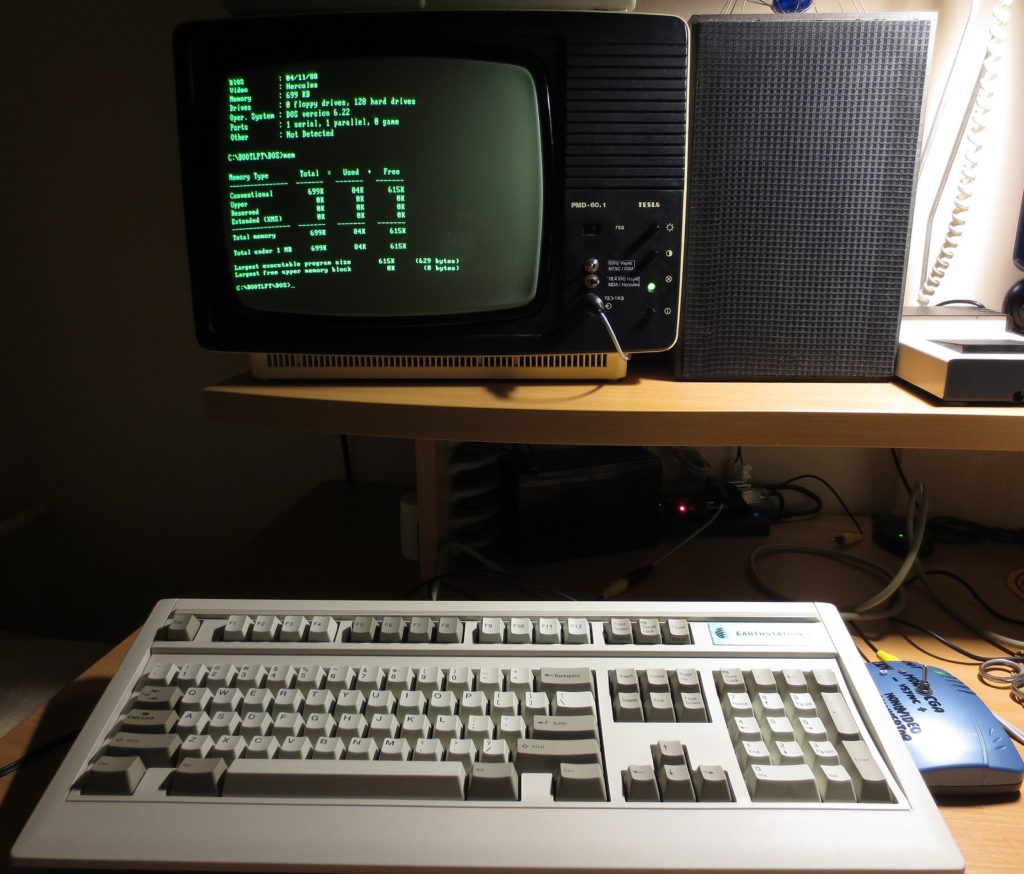 And the other interesting thing in this rig, is the graphics chip: the NCR 7280. During the initialization of the machine, or inside the “BIOS SETUP” (oh, by the way, I’ve managed to dump the BIOS ROM code to here), the user can specify what kind of graphics mode to use. This chip can actually switch between MDA/Hercules, CGA or the so-called “Hi-Res CGA” (incorrectly referred in the manual as “MCGA”), on-the-fly! The BIOS does this only during the boot-up, which takes just some 2 seconds, but since the machine employs a real-mode-only CPU, the BIOS SETUP utility can be invoked anytime the machine is running, through the Ctrl-Alt-Insert key combo, i.e. without a prior reboot. 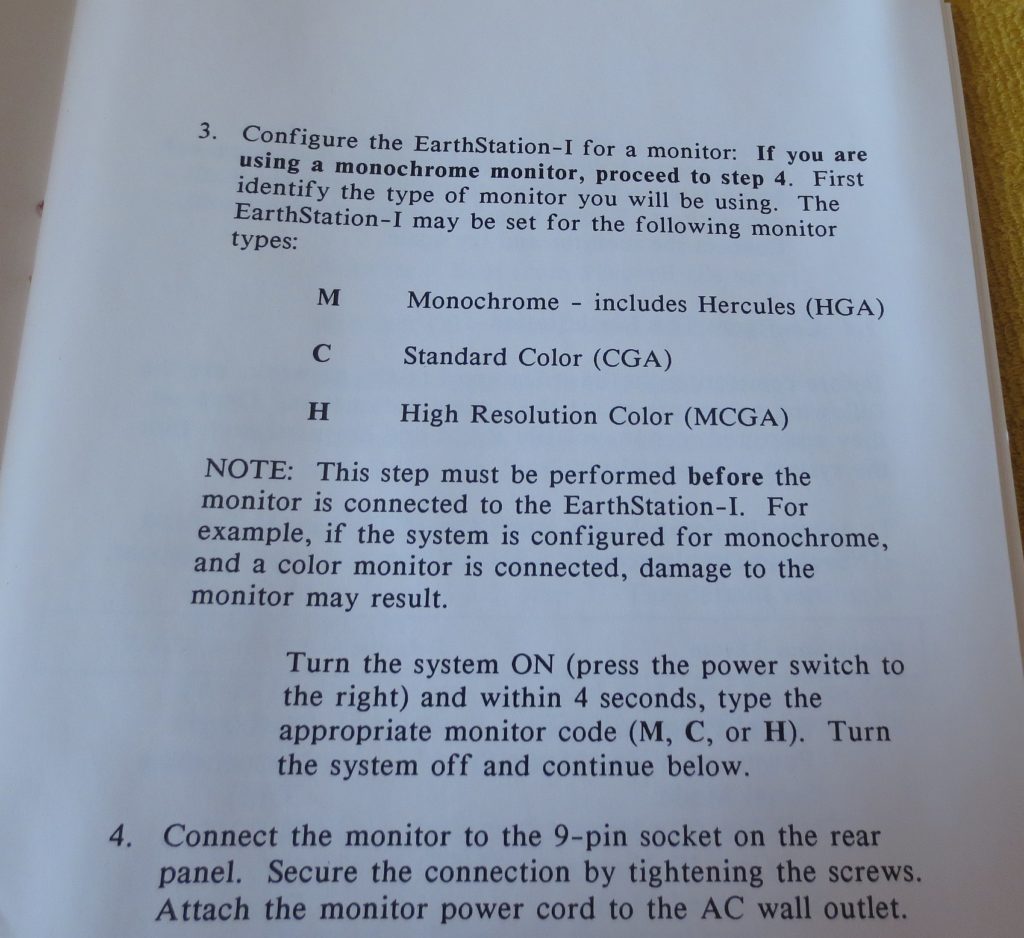 If you didn’t employ a multi-sync monitor, the manual specifically warned you to set the proper graphics card emulation mode before connecting your monitor, i.e. MDA, CGA, or the so-called “Hi-Res CGA”

Yes, they had a point here. The horizontal and vertical stages of old single-sync computer monitors were driven straight from the TTL HSYNC and VSYNC levels of the video card itself, instead of employing a complete horizontal stage with a chip that could be set to sync around 15.6k freely, like in analog TVs.
This is because sometimes, driving the old monitor’s flyback transformer through the improper horizontal sync signal (outside its operating range) could not just cause a corrupted picture on screen, but also permanent damage to the horizontal stage.
The “Hi-Res CGA”, something completely unknown to me before, was also a “hack” that specifically required the use of a multi-mode, multi-sync monitor: it could be employed to increase the resolution of the two CGA video modes, 320×200 and 640×200, to 320×400 and 640×400. But I do not know of any software or any other video card chips (besides the NCR 7280 and its variants, 72C80, 72C81) that were utilizing this mode. The manual of the EarthStation is confusing this with the MCGA, which itself was a stripped-down version of the VGA, used only the IBM PS/2 series. 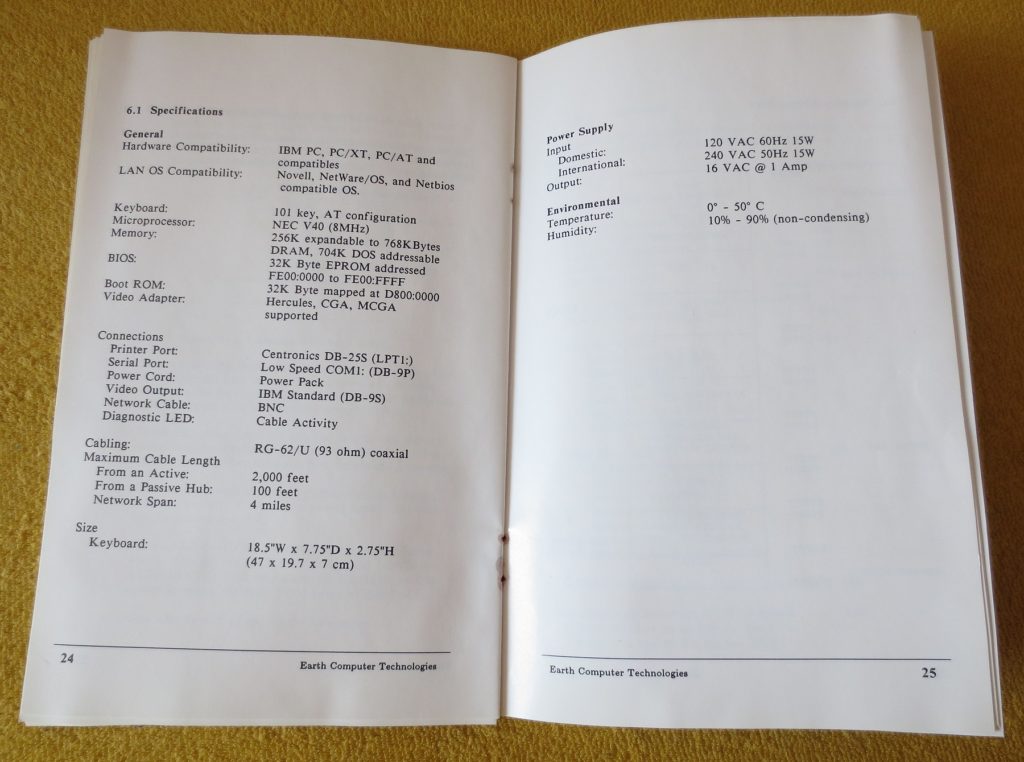 And that’s about it for the EarthStation-I ! Besides BootLPT/86, I have also managed to boot it the way it would be usually used with, and that is Novell NetWare on a 286 rig. With some old 8-bit ARCnet client card configured as a server… finding a suitable driver was fun. And the “network cable” of the ARCnet interface was just a grey old mono audio cable terminated with BNC connectors on both sides, just to test it.
Finally, if you ever thought of floppy variants of old Windows operating systems being a hassle to install…….. then try installing Novell NetWare 2.1 to a hard drive, alongside DOS. Gentlemen, the installation process is polymorphic. From floppies. Now that is a definition of hell.