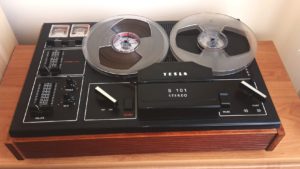 The Tesla B101 (ANP272) tape recorder was an affordable, single speed, home-use four-track stereo reel-to-reel tape recorder produced in Czechoslovakia in the early 1980s. At that time, the local production cassette decks and “boomboxes” offered a maximum frequency range capped at 10 kHz, and since there was no such thing as noise reduction in these Eastern European decks, it was no wonder these reel machines were more popular in home use, as they’ve offered superior sound quality and a longer playing time. 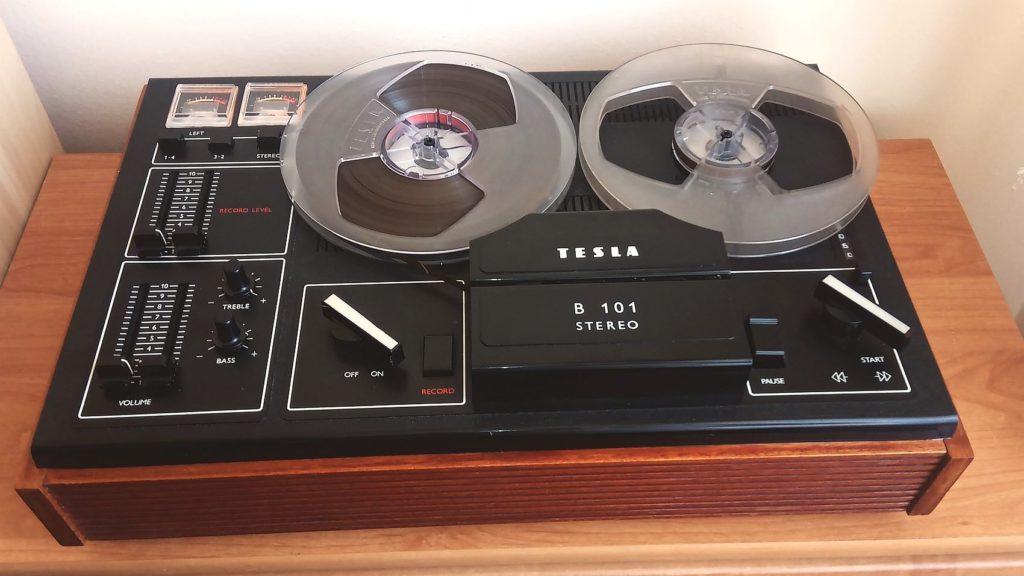 Front view.
Operating levers and clutches taken from the previous B100 model.

These reel tape recorders were a very popular supplement to the record player in one’s living room, as they’ve provided exceptionally easy means of duplicating and listening to (pirate) copies of music, especially from the West, because obtaining records with Western popular music of that time, was not easy. With the amateur-ish recording done properly, these machines easily outperformed the inferior quality cassette tapes of those days. And no government institution did care about copyright of some “imperialist” music work in a “communist society”, so this was an active trend. 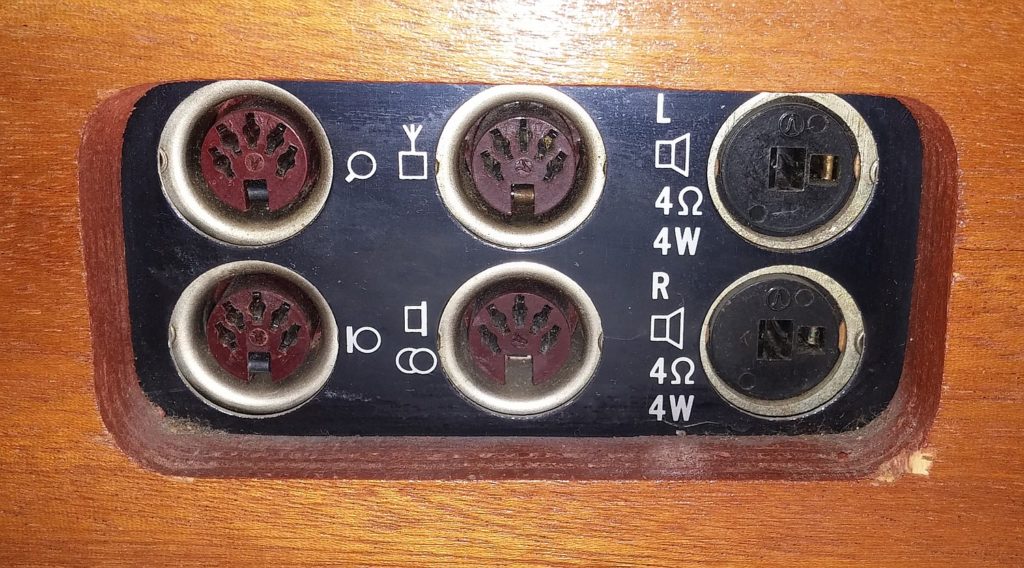 They were also readily connected with a TV set, a phonograph, tuner or a microphone, an 8-bit home computer or another tape recorder through the means of a 5-pin DIN connector, which was the de facto standard of the home electronics produced in the 1980s in Czechoslovakia. Sorta like USB nowadays. 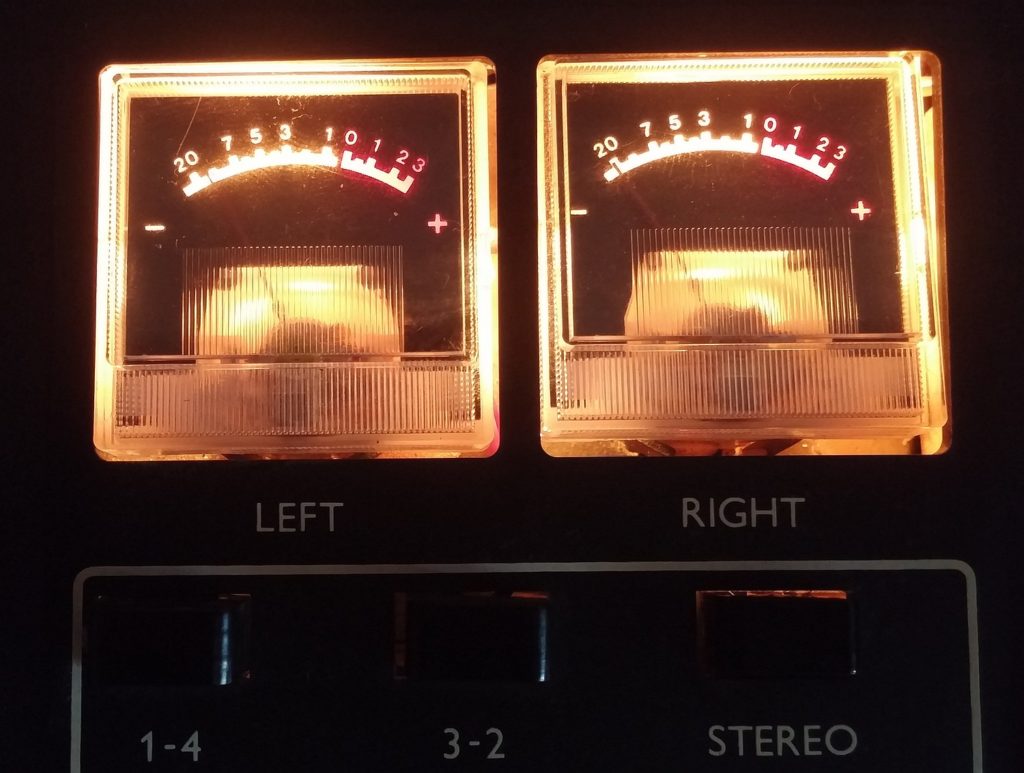 VU meters and track selector buttons (for mono or stereo)

This machine has just one motor and 2 heads, one for erasing and the other for playing and recording combined. It moves the tape at a single speed of 9,53cm/s (3.75 IPS) with a theoretical frequency range of 50 to 14 000 Hz, up to 18 cm (7 in) diameter tape reels are supported. When properly set up, wow and flutter gets below  0.3%. Minimum stereo separation is defined at 26 decibels. The machine also has both high-impedance (record players/instruments) and low-impedance (line) inputs, a 3.5W 4-ohm integrated speaker amplifier; there’s also a 1.5 watt mono speaker inside the wooden case that automatically shuts off when the external speakers are plugged in. There are 15 transistors, 14 diodes and 2 integrated circuits in the thing. All in all, it weighs something over 10 kg. 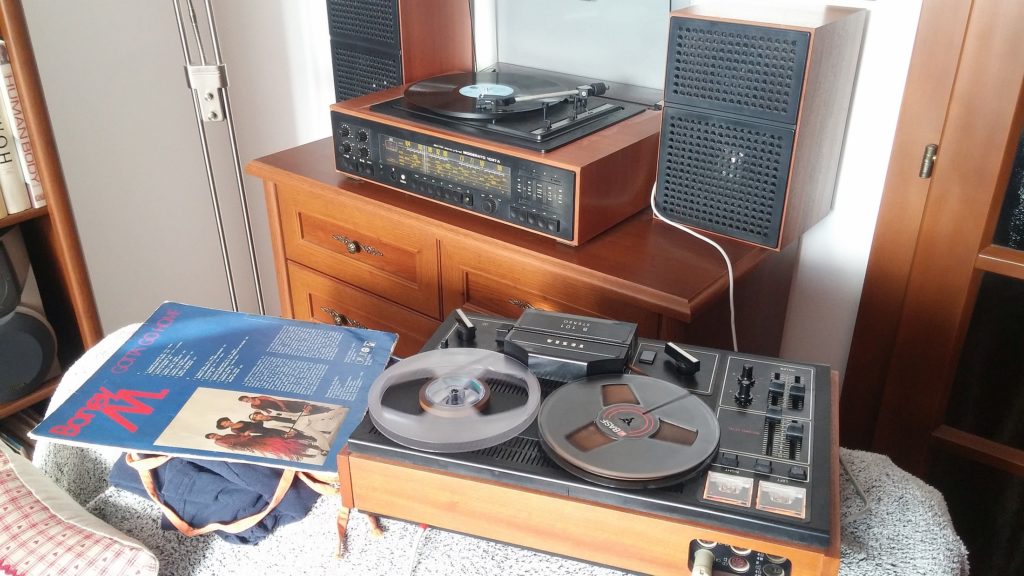 Little recording session with a Moderato 1037A

As for the mechanical functioning, this tape recorder is simple in terms of operation. The whole tape transport mechanism is done by means of pulleys, belts, idler wheels, clutches, felt pads, springs and the “careful alignment” (read: bending) of various sheet metal pieces to make it all work. There’s absolutely no electronics in tape transport at all – apart from the one single motor, that’s turned on along with the power on switch. The rest of the electronics are the input stages, tape biasing, amplifiers and the eraser head HF oscillator. Even the recording levels have to be set manually with fader pots. 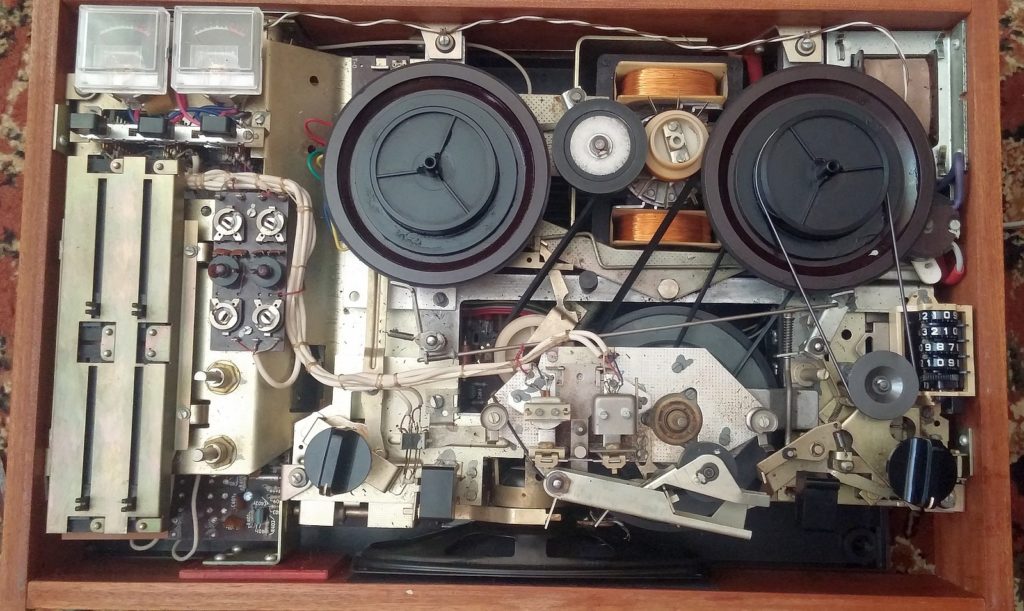 What lies under the front cover

The principle of operation is similar to other consumer-grade tape recorders made by TESLA (or any single-motor machines in general). However, this machine is even more simplified: as soon as the power to the electronics is turned on, an AC synchronous motor drives a pulley through a thick belt, that, in turn, drives a heavy zinc-aluminum alloy flywheel, in center of which is a shaft, that functions as a capstan for the tape transport. There’s a small groove in the big flywheel for a thinner belt, that drives the take-up reel clutch. If the mechanism is stopped (i.e. brakes applied to both reel clutches) and power is on, this belt is left to slip freely, as the motor and flywheel are spinning on a constant speed.
And this is a major engineering flaw! Even though the take-up clutch doesn’t require any significant torque to be rotated while playing the tape, because the main tape movement is done by means of the capstan and pinch roller, this bad design causes increased wear of said belt, if the machine is powered on AND stopped simultaneously. This increased wear will eventually result in the take up reel jerking while rotating, as the belt gets weak. If this goes unnoticed, the reel will eventually stop rotating while tape rolls forward, entangling the tape inside the machine in the process. 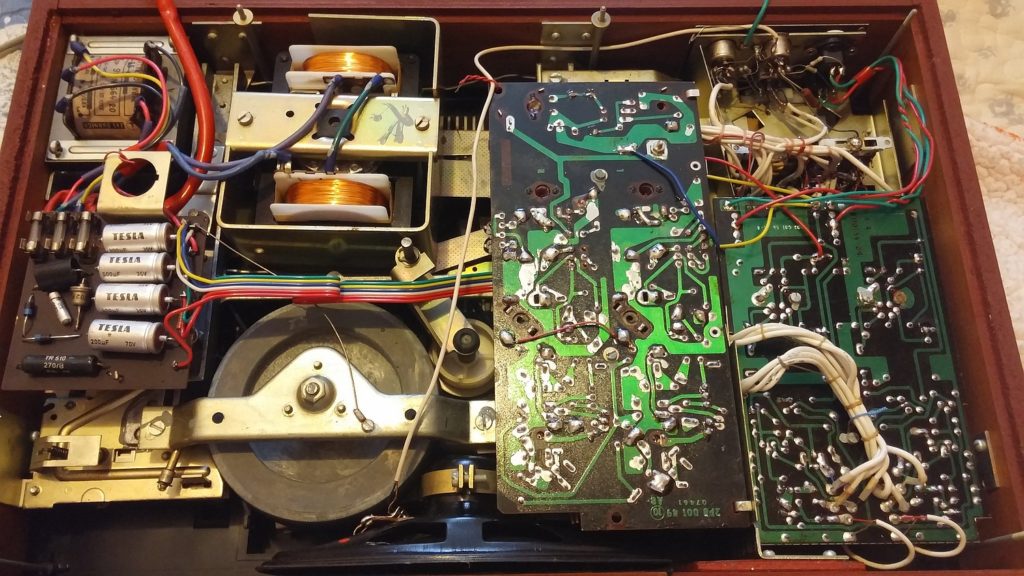 Back side. Notice the big flywheel

The whole chassis and the motor support is cast iron, with exception of the flywheel, that was die cast from a “ZINKAL” zinc-aluminum alloy, which was prone to cracking when not annealed properly during manufacturing.
Fast-forwarding the tape actually involves pushing the whole motor assembly to one of the reel clutches (reverse is done through an idler wheel). Because the synchronous motor turns at a constant speed with full torque, that particular reel clutch to be forwarded to, is allowed to slip during the initial wind-up. This maximum torque limit can be adjusted by the means of a leaf spring on each reel clutch; the necessary friction is created by a felt pad on the bottom of the clutch. Because there’s no dedicated gear change, and the motor doesn’t spin that fast; it takes 6 to 8 minutes, depending on tape length.
The machine does not have an autostop while playing, fast-forwarding or if the tape loses tension; the reel that’s being powered just continues to spin freely until stopped manually. There’s a one single lever to do 3 things: it operates the pinch roller mechanism to play the tape, or to fast-forward in both directions. The other lever is the power switch. 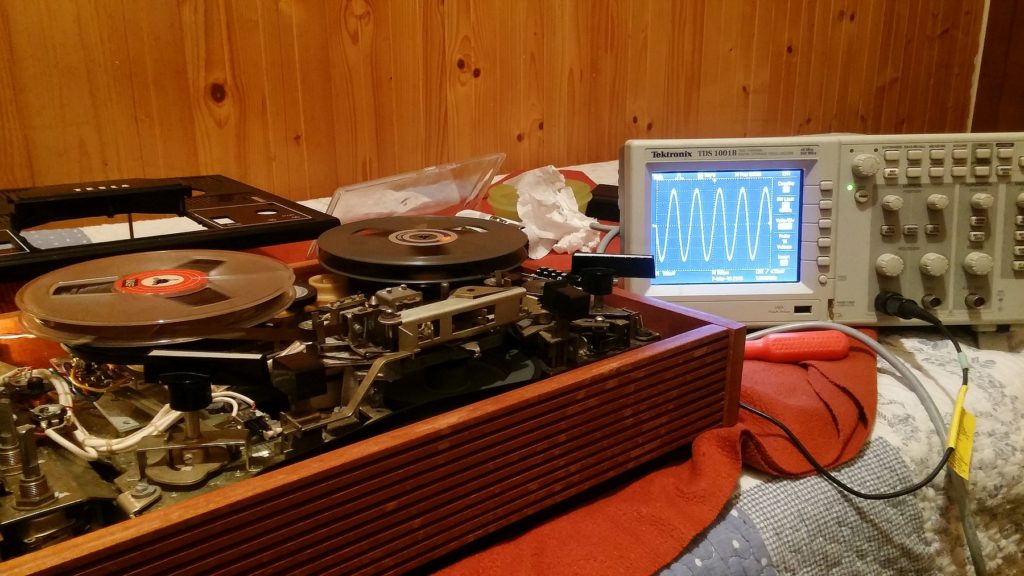 Fine-tuning tape speed of this machine involves adjusting the speed of the flywheel whose shaft is the capstan. This is done with a plastic variable-pitch pulley screwed on the AC motor. Tightening or loosening the pulley alters its diameter for the belt driving the flywheel. This does not alter the fast-forward speed, as the flywheel mechanism is only used to play the tape.
There are 2 simple lever-style brakes in the machine, and they are only used to bring the fast forwarding to an instant halt. In order not to rip the tape in half, the correct biting point of the brakes is set with… *drum roll*… pliers. The appropriate tape tension during playing, is determined by the status of the felt pads on the bottom of each reel friction clutch. 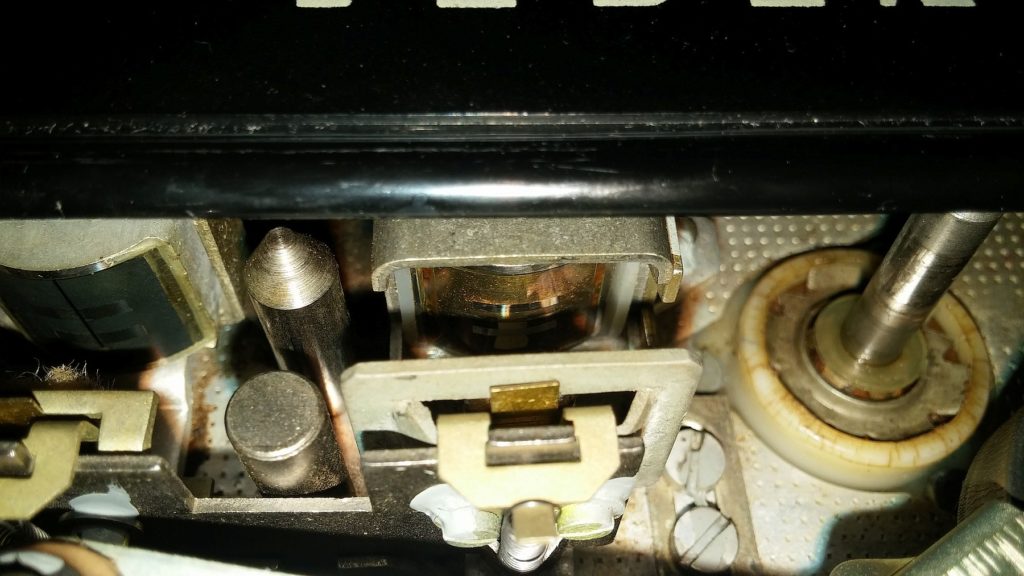 The machine allows easy access to the tape mechanism for cleaning, as the bottom cover is removable by hand. To do anything more complicated, you need to disassemble the whole front panel by disassembling the back panel (lol) and all the potentiometer and switch covers on the front. Read: pain the butt. And you pray that everything works when assembled the same as when it was diassembled. 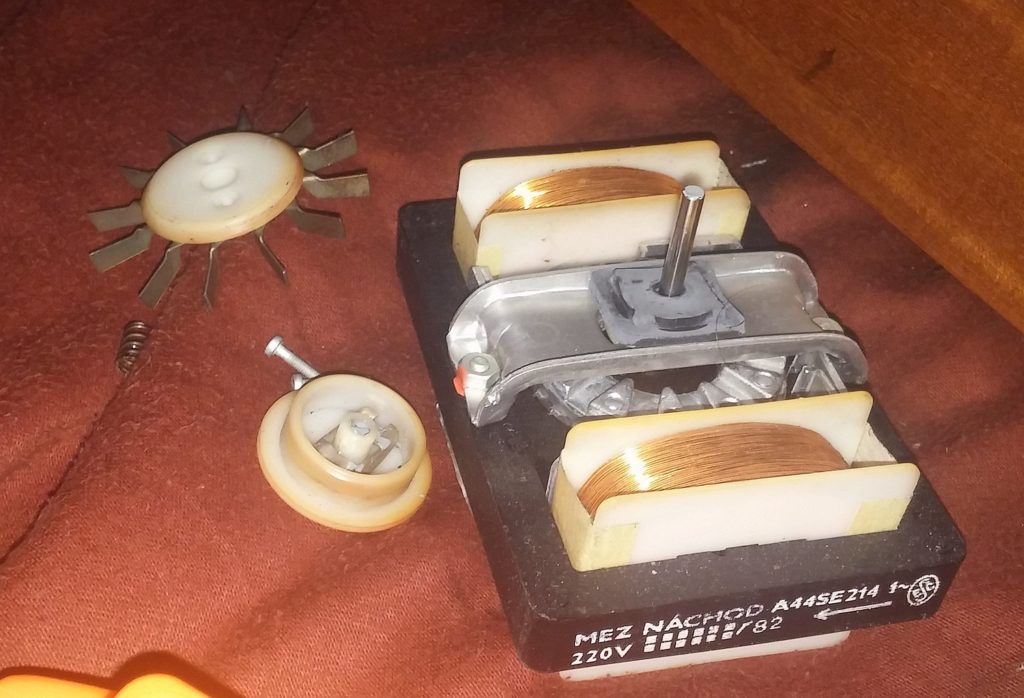 The AC motor. The fan along with its top cover form a variable-pitch pulley to set the flywheel speed. The top of the pulley makes contact during fast-forwarding

See that little fan? That’s the second major design flaw of this machine: overheating – and the engineers knew it. The machine comes with a plexiglass dust cover, that is explicitly forbidden in the manual to have it on while the thing is operating (that’s even impossible with 18cm reels). The motor heats up considerably, which creates an interesting problem.
In normal function, the rotor is allowed to spin, in between the top and bottom mounts. The shaft of the rotor rides on a very small ball bearing inside the bottom mount (this construction makes the tape recorder work only in the horizontal position!). This bottom mount should be topped up with oil at all times. Since the rotor gets hot, the oil supply evaporates, greatly increasing friction.
If left untreated, the weight of the rotor (the machine is placed horizontally) constantly pushes on the ball bearing, forcing a dent in the bottom mount after some time. This causes a clicking noise, and eventually an eccentric run-out that renders the machine unoperable, because the motor won’t supply enough torque to turn the flywheel properly. This can be temporarily solved by swapping the dent-damaged bottom mount with the top, which gets minimal wear. But unless the mounts are kept lubricated, the problem will reappear. 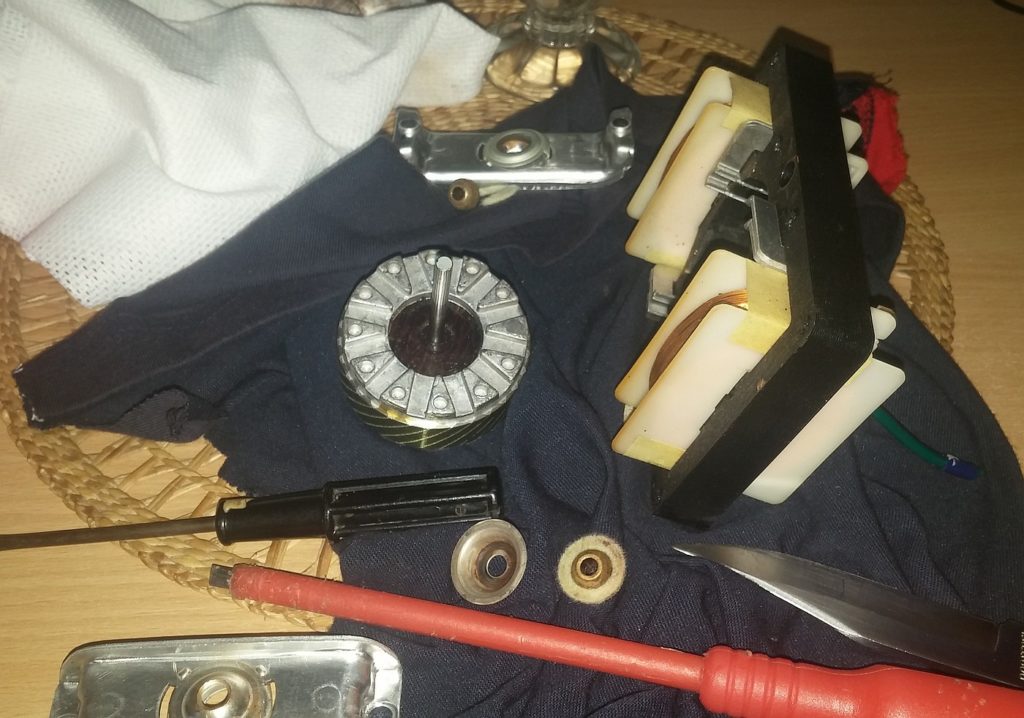 Disassembling the rotor for lubrication of its mounts

After I did this tedious job, complete with all the belt, brakes and head alignment refurbishing, the machine lives again to tell the story! 🙂 I use it as a retro data storage for my 8-bit computers, the Tesla PMD-85 and the Didaktik M. I’ve also tried to record some “digital data” using AFSK modulation on more than fifty year old AGFA tapes: