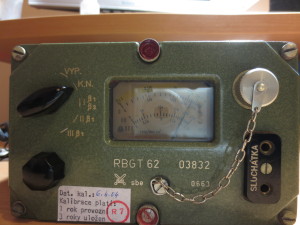 The Rádiometer beta gama, tranzistorový, 62 (“Beta-gamma Geiger counter, transistorized, 62”) or RBGT-62, was a simple radiac metering device of the Czechoslovak People’s Army of the early sixties. 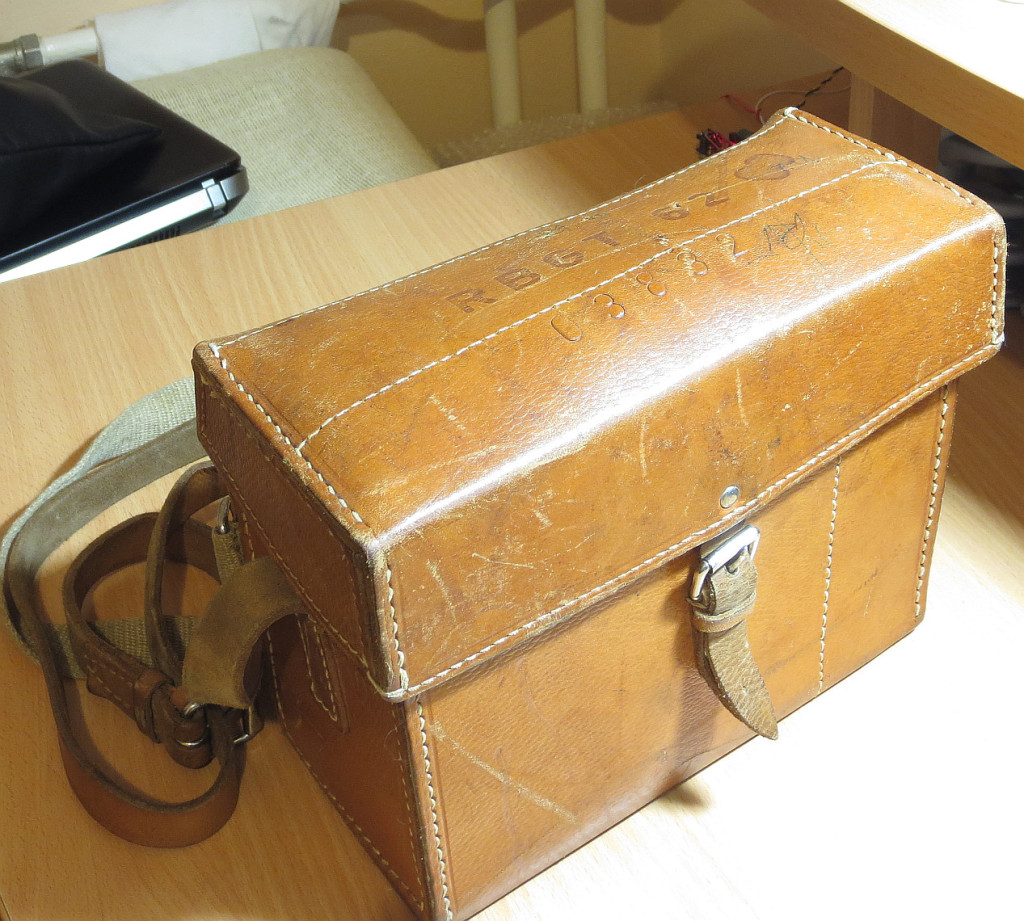 When compared to the IT-65 or DP-5B I own, this meter is the oldest and simplest in terms of construction and electrical engineering, and thus is somewhat clunky. Basically, it is a scaled-up version of the IBG-58-T, with a detachable probe and an integrator circuit. Otherwise, the circuit and electronic parts are very similar to its “predecessor”: even the corona stabiliser mentioned in the IBG article (a Tesla 10TA9) is present here on the secondary side. 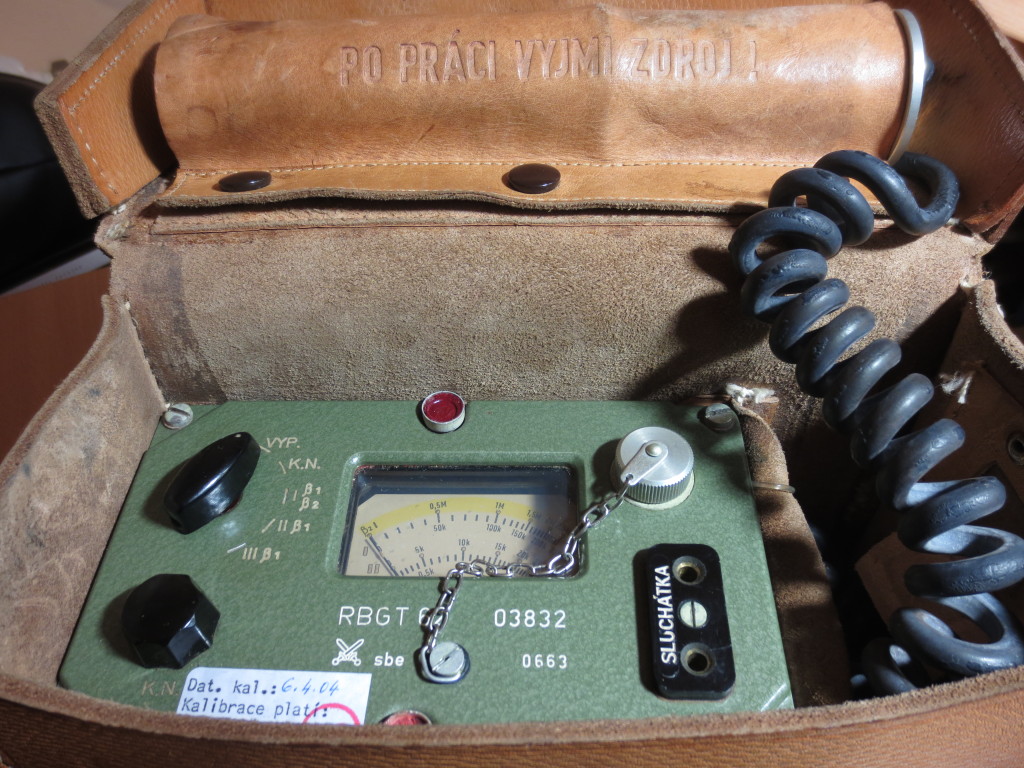 But as you might have noticed, there indeed is something different: the meter is gauged in beta decays, and not milliröntgens: to be precise, it measures multiples of beta particles density on a 1 square centimeter per minute.
As the small equation on the bottom of the scale explains “2,5k rozp./min⋅cm² = 1 mr/hod“, one milliröntgen per hour is equal to 2500 decays per minute on a square centimeter, but only if the probe filter shield is switched into the gamma position. Personally, I think this ought to be the correct form, as the röntgen is a unit of gamma radiation, and not that of beta decay. 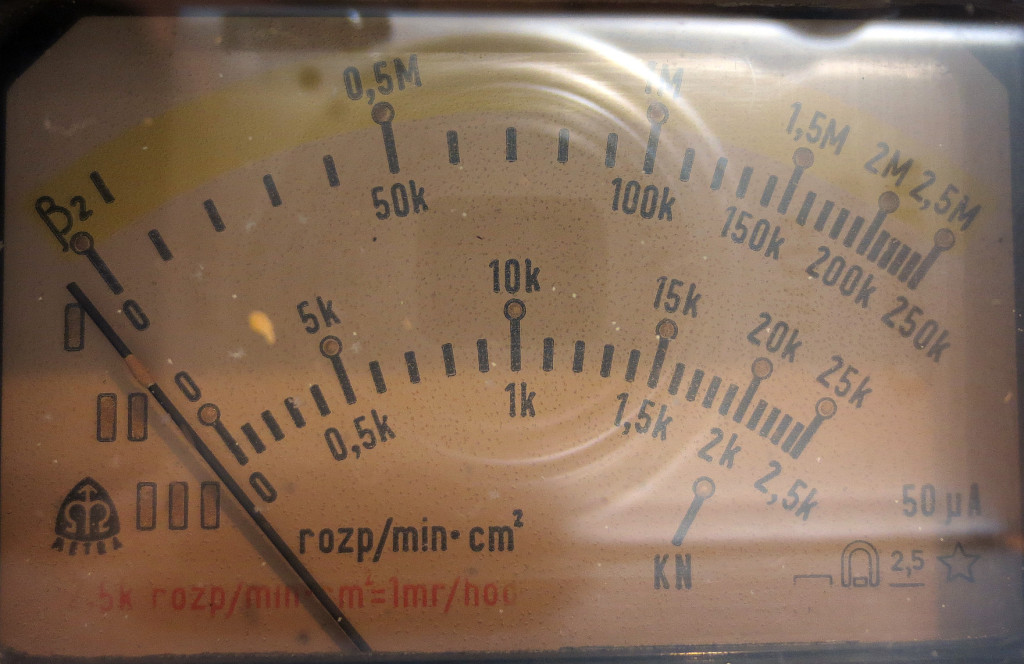 The operation is quite simple: after the unit is switched on, the boost (flyback) converter for the radiometric Geiger tube, has to be calibrated to the “KN”, or Kontrola napätia (“Voltage check”) marker, similar to the DP-5B. Should not this be possible, the batteries (two fat 1.5V “D cells”) must be replaced.
At this point, the device registers background radiation as occasional ticks in the earphone. For the meter to register radiation properly, one of the 3 ranges has to be switched to. 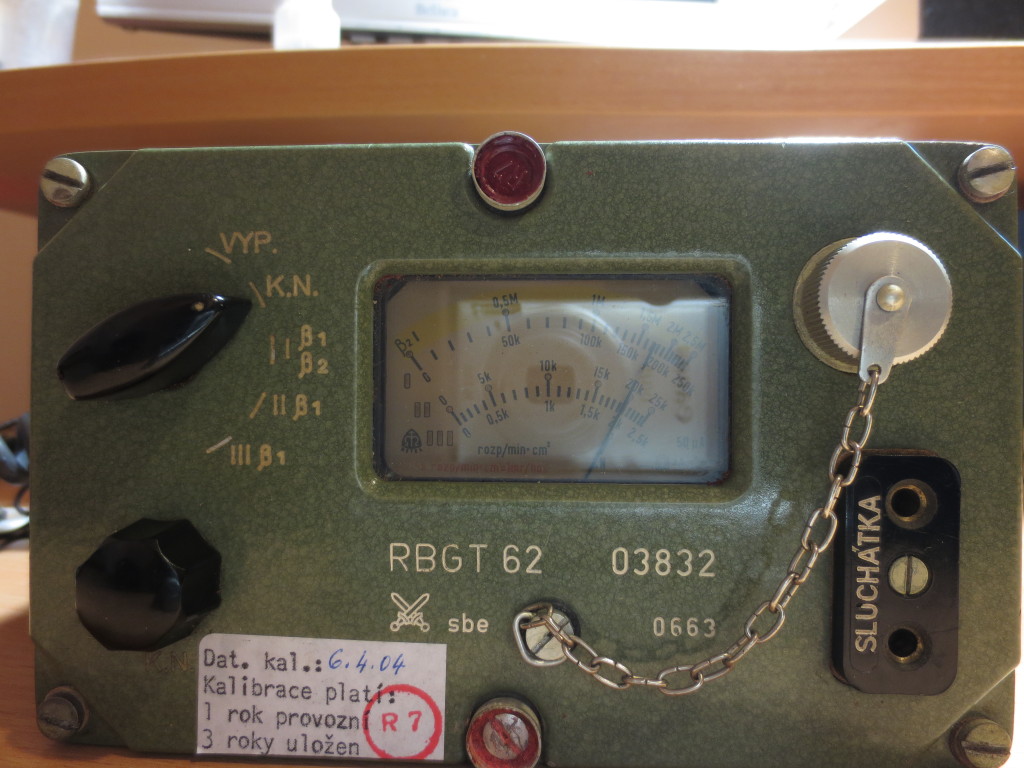 Thus, proper radiation contamination checking would be as follows: probe on “beta 1” position, least sensitive range – range “I”, read out value on meter – if too low, downshift to the other 2 meter ranges to get a more accurate reading. With this way, a combined readout of both beta and gamma radiation is observed. To get into further detail, the probe shield should be set to “gamma” position with the same object and distance measured. Should this value be zero or negligible, the object is a pure beta emitter (say strontium-90), or contaminated with beta particles – measurement finished. On the other hand, if this value is comparable, or a little bit lower, it’s a gamma emitter – or has gamma contamination present – for which the conversion factor to milliröntgens now applies and the measurement is done.

If however, is this value somewhere “in between” with the previous reading on “beta 1” position, this is the gamma ray activity of the irradiated object. And to get a reading of the beta activity only, subtract this measured value with the previous reading. Now you have two different readings, one for beta, one for gamma rays and you know the object is contaminated with both types of particles. 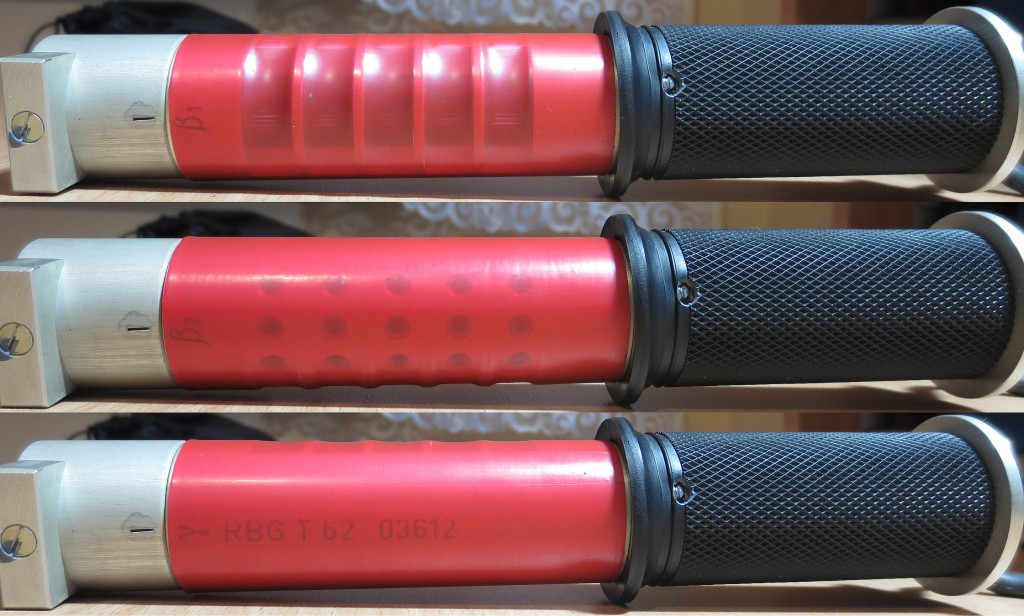 There’s still one case left: say the object is a beta emitter (no reading with gamma shield on), but the meter goes off scale on the highest range “I”. On this range “I”, the probe can be set to “beta 2” position to get a readout on the yellow scale atop the meter (for up to 2 500 000 beta decays).

That’s it, measurement is complete. Compared with a digital meter, it isn’t that easy since you need to switch ranges accordingly, but the principle of using the probe sheath, depending on the object contamination, is the same. 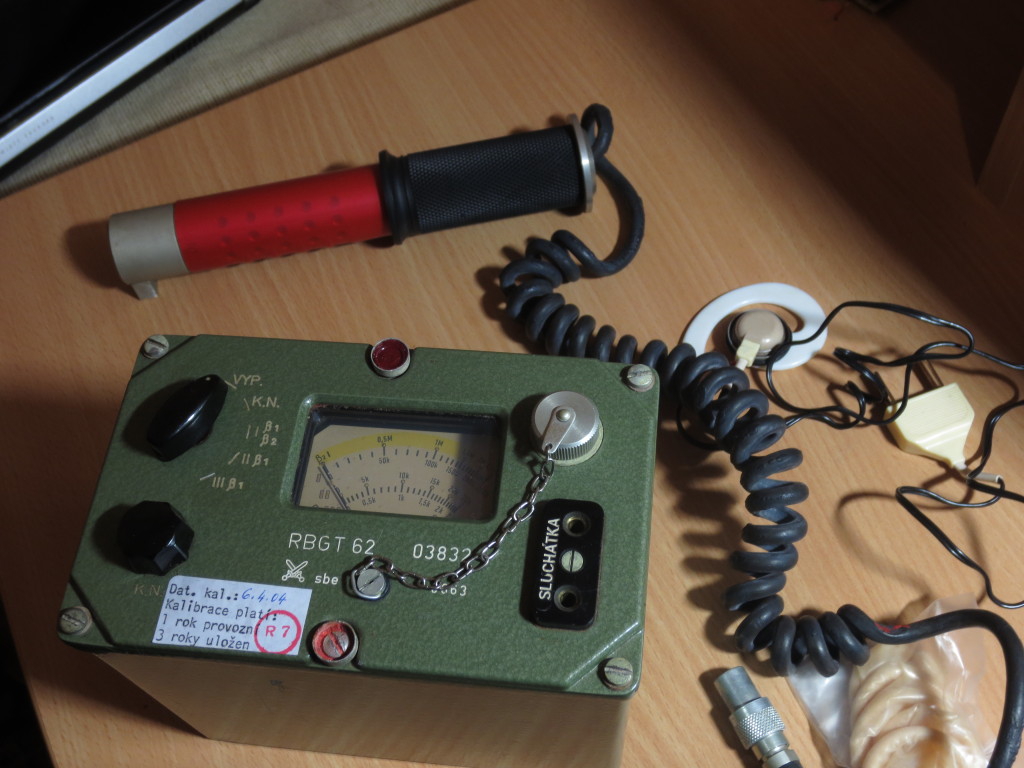 The analog integrator in this meter, if unfairly compared with the digital Geiger counters of today, has a very fast rise and fall time. That means getting a readout is a matter of a single second, or two… plus the time it takes you to divide the value by 2500 if measuring gamma radiation. 😉
This also brings a disadvantage that the analog needle is sensitive to shock and other unwanted movements of the meter. The DP-5B had a very slow counter circuit, which took tens of seconds for getting a maximum readout. Then again, you could shake it like a maniac and the needle would keep fairly stationary, and it needed to be reset using a button to fall down faster. Here, it isn’t. 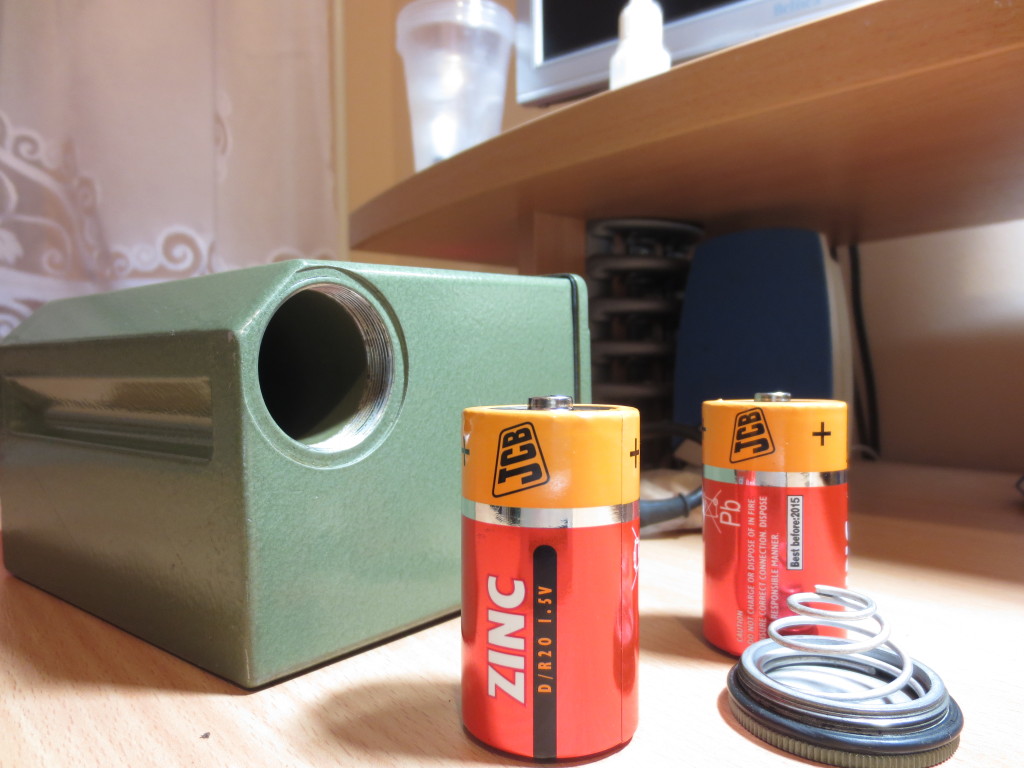 I do seem to be lacking user’s manual (which also was a calibration protocol for these kinds of meters) and a strontium-90 check source for this particular meter. However though, I was able to get a time estimate when this meter was built, or put into military service, from an ink stamp marker I found in the case, which mentioned november 1962.
The only thing I know about its last calibration, is that white sticker mentioning a calibration date of april 2004. Quite spooky huh? 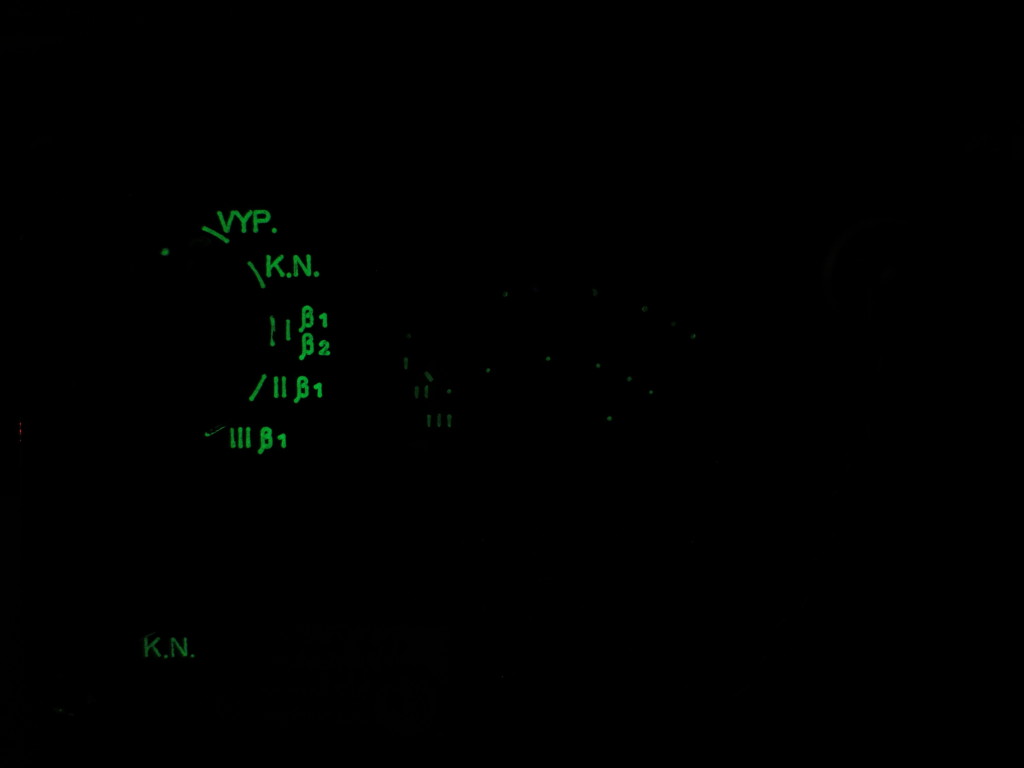 Controls in the dark, after being shined on

And that’s it, folks. Despite having three ranges, it’s a fairly low-range meter, compared to the old IT-65’s ionization chamber and DP-5B’s second Geiger tube, but you’d be harmed or dead anyway if you found yourself in an environment this meter would go permanently off-scale.

From the technical side, I like the detachable probe and the foolproof construction of the meter. It’s also lighter, especially if used with plastic D to AA cell adapters… But it has no scale illuminator switch and as you can see above, they’ve sure as hell saved money on fluorescent lacquer paint!