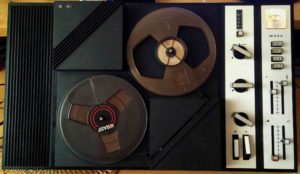 The Tesla B90 (ANP290) reel-to-reel tape recorder was a device that was responsible of introducing me, as a four-year-old at that time, to works of the Beatles, Led Zeppelin, Iron Maiden, Jimi Hendrix, and later ABBA and many other artists that persist in my playlists to this date. Besides the machine being a heavy behemoth, weighing more than 12 kg, bigger than half a meter in width and having absolutely horrendous mechanics, this was the thing that ultimately engraved the roots of my taste in good music as a very young kid. 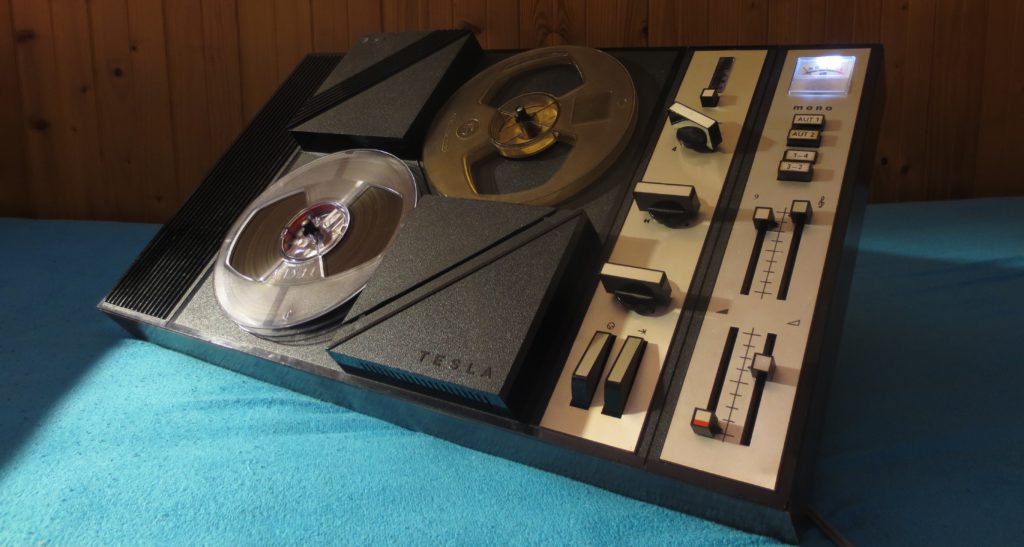 My parents originally bought this type of machine in the mid-70s and kept it until the mid-90s, then they threw it away when I broke it, playing the thing over and over again. The fact that they’ve also discarded the old reels is something that I won’t regret them 🙂 , since they were throwing out a piece of history – my sisters and I were on the tapes.
I’ve got this particular model again in 2017, to commemorate the nostalgic 20th anniversary of last seeing that kind of a machine in a somewhat functioning state 🙂 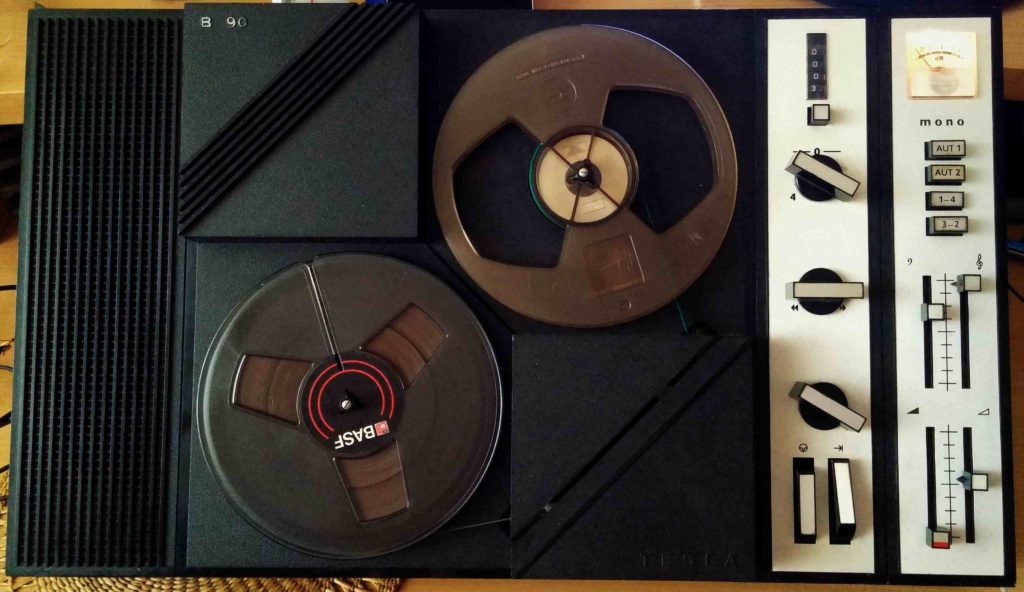 Unlike the Tesla B101 reel to reel recorder reviewed here, which is newer (1982) and its mechanical construction stems from an older B5 model, made in the late 60s; this B90 model is older than that B101, and inherits its mechanics from a different model – the Tesla B70.  Both the B101 and B90 machines were of a single motor construction and rely on a heavy flywheel to move the tape smoothly, however, the B90 was more mechanically complex, with an unusual diagonal reels placement.
While the playback on the B101 had been stereo, the machine was single speed only, limited to a horizontal position while playing, and the motor suffered from overheating due to bad design.
In contrast, the decade-older B90 was two-speed, played in virtually any position (came with wall mounts, too), did not have problems with overheating, and while it was mono, a stereo playback was possible with a special dedicated preamplifier. 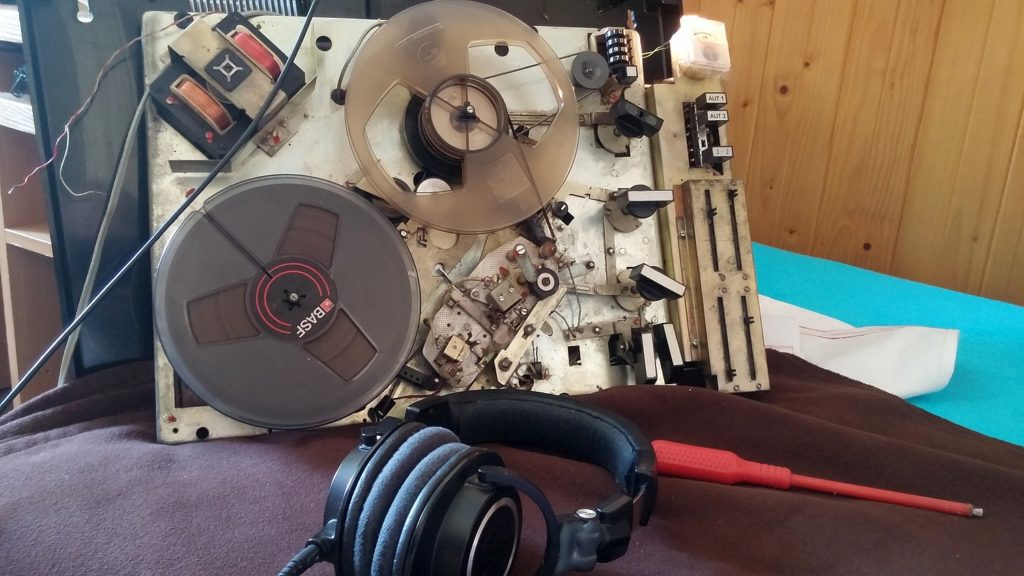 And this is where my praise for this machine ends! While the simple B101 had its flaws, this B90 was the pinnacle of absolute horrendous engineering I’ve seen in tape recorders to date, which made it very unreliable and criticized even in the days when it was introduced.
The machine uses a swinging arm assembly of 4 idler wheels to fast forward the tape (2 per direction), with a very thin rubber surface of substandard quality. As a result, these wheels were worn out in a jiffy. After a while, the machine ceased to fast forward the tape completely, in both directions.
Also, the proper clearance (“biting point”) of the swing arm needed to be set, between the idler wheels and the disks spinning the reels. Or else the thing either wouldn’t provide enough torque for the fast forward to wind up. Or, if the wheels were set too close, the machine would chew or rip the tape as soon as the wind-up commenced. In contrast with the B101, the disks spinning the reels were not friction clutches that limited the over-torque.
The brakes in this machine were constructed from a felt pad, glued onto a thin wire. These were spooled over the reels and were responsible not only for maintaining proper tension, but also to halt the fast forward mode. This system was very unreliable and you had to tinker with it to find a compromise: either you have a tape recorder, that plays without significant wow and flutter no matter how much turns there is on one reel with respect to another; or you have a machine that can stop its fast spinning reels instantly. But not both at the same time. 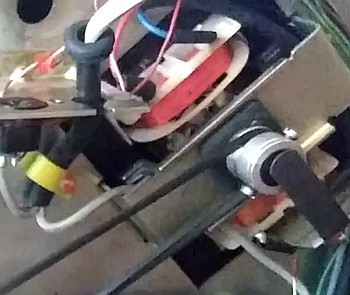 The AC motor. Notice the spring

In order so that the machine could play in any position, a flat spring was used to press against a plastic bearing of a pulley, that was installed on the synchronous AC motor, powering the whole thing. After some time, as the whole mechanism rubbed down on it, the rotor dropped down too – creating all kinds of noises and a decrease on torque, making the thing unlistenable to.
In contrast with the B101, the thing was also equipped with an autostop. In order for it to work, you’d glue a thin metallic foil on the plastic leader of your tapes. When the now-conductive leader went through the tape transport mechanism, an electromagnet would sense this, and flick the switch off, preventing the reels from unspooling.
Unfortunately, the coil of the electromagnet was placed in direct series with contacts of the tape mechanism, so that the conductive foil of the tape served as a conductor for the whole current taken by the coil of the electromagnet. That burnt out the conductive foil of your tapes quickly and the autostop ceased to work.

Replacing the 12-pole switch used between playback and recording

Of course, due to its age, the whole thing is a haven of germanium transistors that get progressively more noise as they age, dry electrolytic capacitors and ceramics with increased leakage current. Other than that, you have to be very careful not to accidentally peel off the decorative aluminum sheets off the front panel while taking off all the switches (it’s very easy to bend them afterwards, and then it looks fugly). And then there’s a big ol’ 12-pole, single throw switch of Polish “quality production”, which has a very thin plastic actuator that readily snaps off, rendering the machine unusable (see photo above). 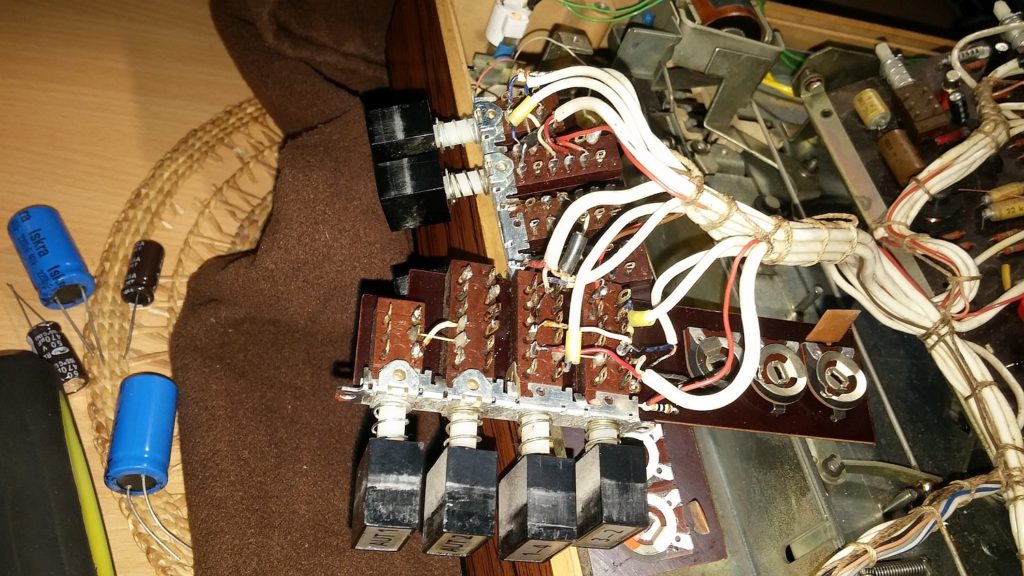 Apart from the manual recording level setting, this machine also had a JFET-based circuit for automatic level control, either with a short timebase for speech, or long, for music. It worked to a certain degree, but it was still better to use the manual fader pot. Still, it is quite interesting to see FET transistors in a consumer-grade machine from the mid 1970s. 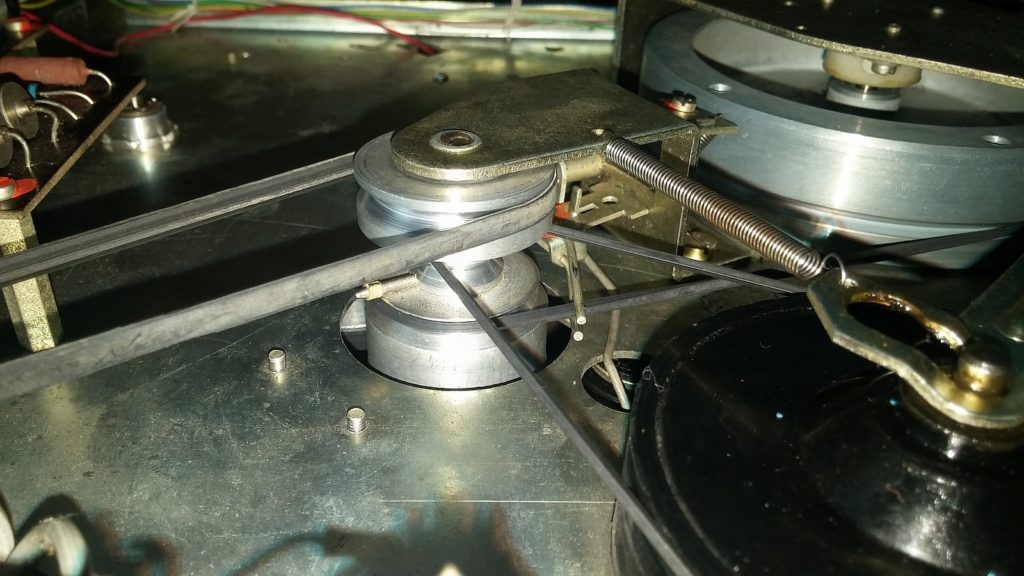 Unlike the B101, the AC motor of this machine spins a central pulley that has multiple grooves. The topmost groove is where the thickest belt between the motor and the pulley sits in. The second groove drives a belt for the take-up reel clutch, and the last two grooves are used with a belt for the flywheel. There are small guiding rods here, that allow this particular belt to slip between the two grooves, changing the overall rotation speed of the flywheel, whose shaft acts as a capstan for the tape roller, between 4,76cm/s and 9,53cm/s (1 7/8 IPS and 3 3/4 IPS).
The bottom of the motor-driven pulley connects with the fast-forward swinging arm assembly to provide maximum torque. 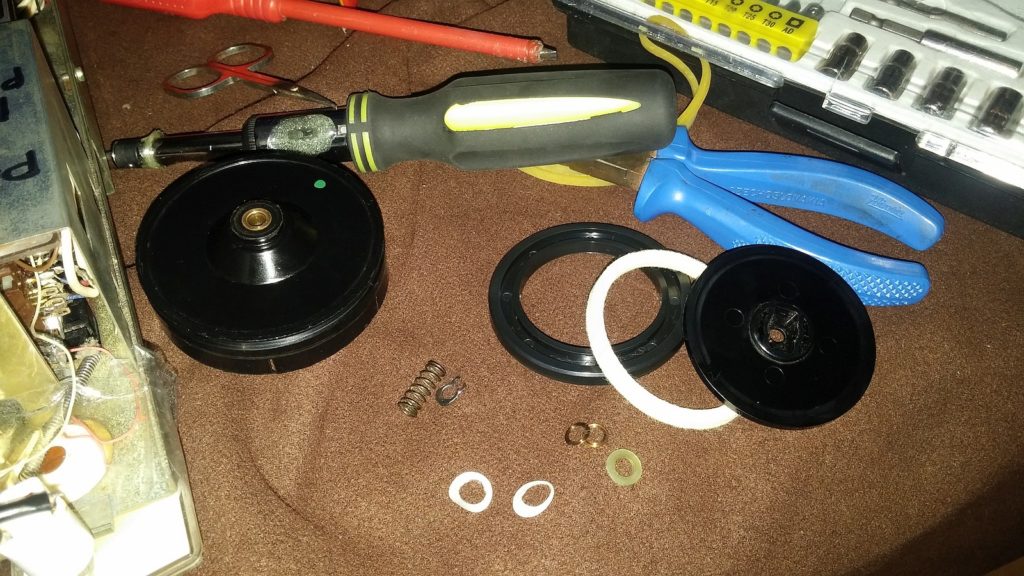 To drive the take-up reel, there’s a big friction clutch with a felt pad inside. When the machine is powered on, but stopped, or in fast forward, this clutch is constantly spinning (driven by a belt from the motor pulley), but it is disengaged from the take-up reel. When the switch to play the tape is rotated in, the tape gets pushed in to the heads, the pinch roller starts rolling the tape forward along the capstan, and this clutch gets pushed in too (like when you get off in a car with manual transmission), engaging the rotating motion to the take-up reel. While this system is surely better than the “slipping belt” solution of the B101, if this thing is a little bit dirty or greasy, or the spring that pushes in the clutch is a wee bit misaligned, it all results in loud squealing.
Also, an incorrect setup of the clutch spring makes the machine struggle while fast forwarding…

All in all, while I did manage to get that machine to work again, I’ve ditched it in the end, as it was requiring constant realignment and the sound was not that perfect, due to the heads being just flat worn out.