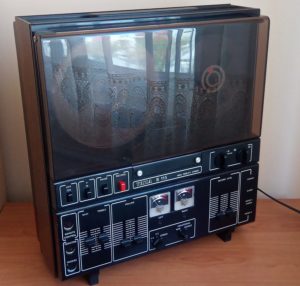 The Tesla B 115, or ANP 268, was a consumer level, four-track stereo reel-to-reel tape recorder, produced in former Czechoslovakia in the 1980s, whose specifications fulfilled the Hi-Fi requirements according to the ČSN 36 8340 norm (which was a more strict version of the original DIN 45500 Hi-Fi standard, valid at that time). This allowed the manufacturer, Tesla, to brand it with a “high fidelity stereo” marking. 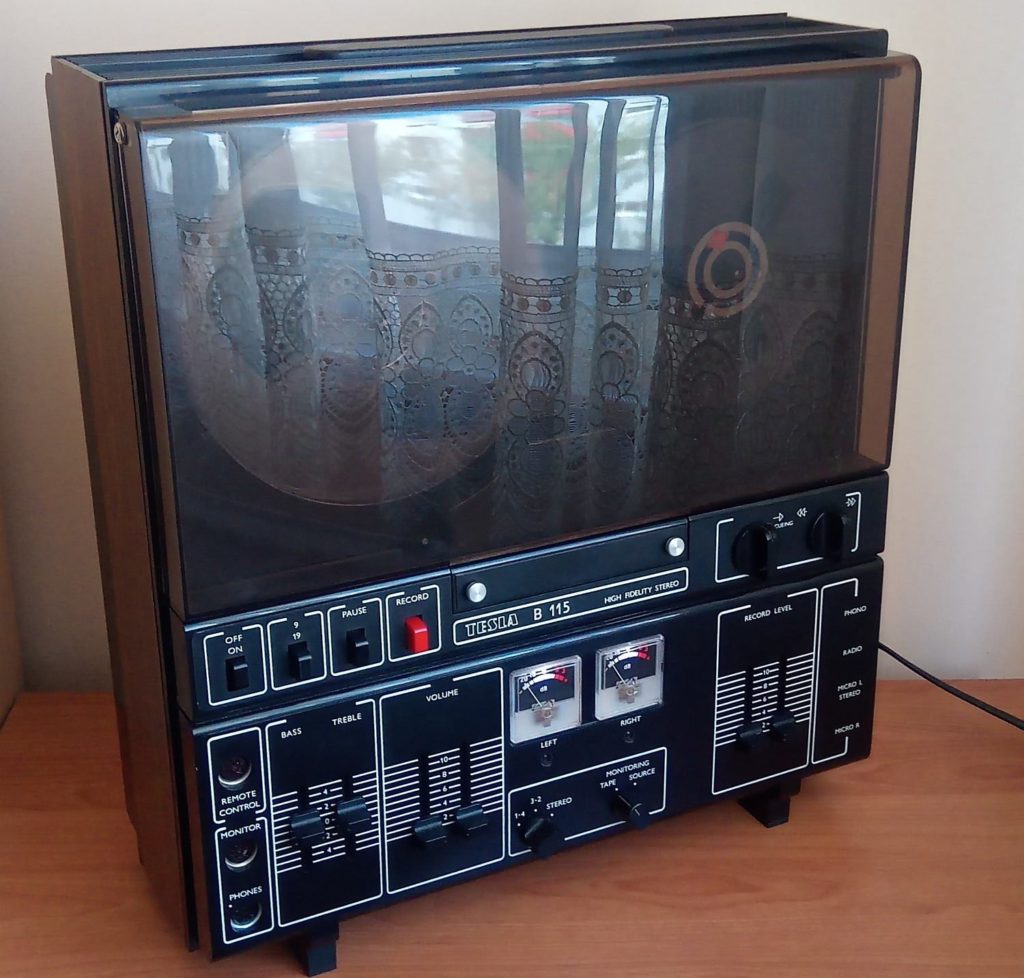 Front view, with the dust cover on

To get the facts straight, TESLA – which was a former Czechoslovak electronics conglomerate of companies, that produced nearly everything, ranging from discrete electronic components, such as diodes and transistors, all the way up to radars, computers and military equipment – enjoyed its heyday of quality-made, consumer-grade tape recorders, mostly in the 1960s. What followed afterwards in the seventies and eighties in this field; the B4, B5 and the B70 series, and its derivative models, were of an outdated engineering and stagnant design, stuck in the grayscale of harsh “socialist realism”. Even Polish (Unitra) or Soviet designs were way ahead of what came from TESLA Pardubice and Přelouč those days.
This particular model, the B115, was of no exception to that rule. It stemmed from the B70 series of tape recorders, which included one of the most horrendous examples of bad engineering TESLA came up with, the B90. Despite this thing now plays good, and even that they’ve sorted out most of the design flaws of those series (and introduced some new ones), however, being of a single motor construction, like all reel machines TESLA came up with, it was hopelessly outdated to compete with comparable Western technology of the eighties.
However, compared with the Tesla B90 and the B101 also reviewed here, it was a good few levels up in terms of quality! 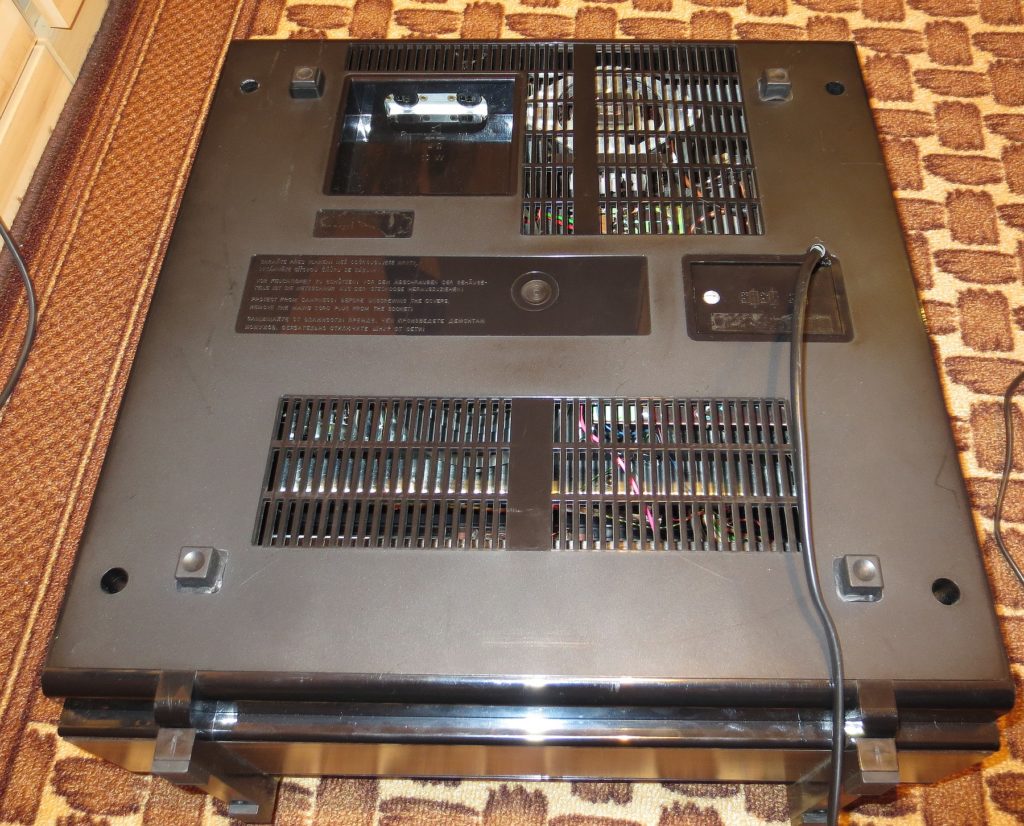 Back view, with reminders to protect the machine from humidity.
No warnings of death from electrocution, or all hell breaking loose upon disassembly.

The whole mechanical function of the machine is, like all the other reel-to-reel tape recorders made by TESLA, provided by means of a single synchronous AC motor, driving all sorts of belts, pulleys, wheels and friction clutches, involving almost no electronics in the actual tape transport mechanism.
Compared with the predecessor models of the B70 series however, this machine has now 3 long-life “ANH” heads that are more wear resisting (compared to the “ANP” types, that were of lesser hardness, used in all the older models). This design allows you to monitor the audio as it goes to the recording head, with the “fresh” recording played back on-the-fly, just as it sounds from the tape.
The machine spins its reels either at 9,5cm/s or 19cm/s (3 3/4 and 7 1/2 IPS respectively). When it’s set up properly, with good quality tapes, the overall frequency range is in between 40 to 20 000 Hz, approaching – and sometimes surpassing – the quality of a CD. However, only a maximum of 18 cm reels in diameter are supported… so, as a consumer device, no NAB adapters here. 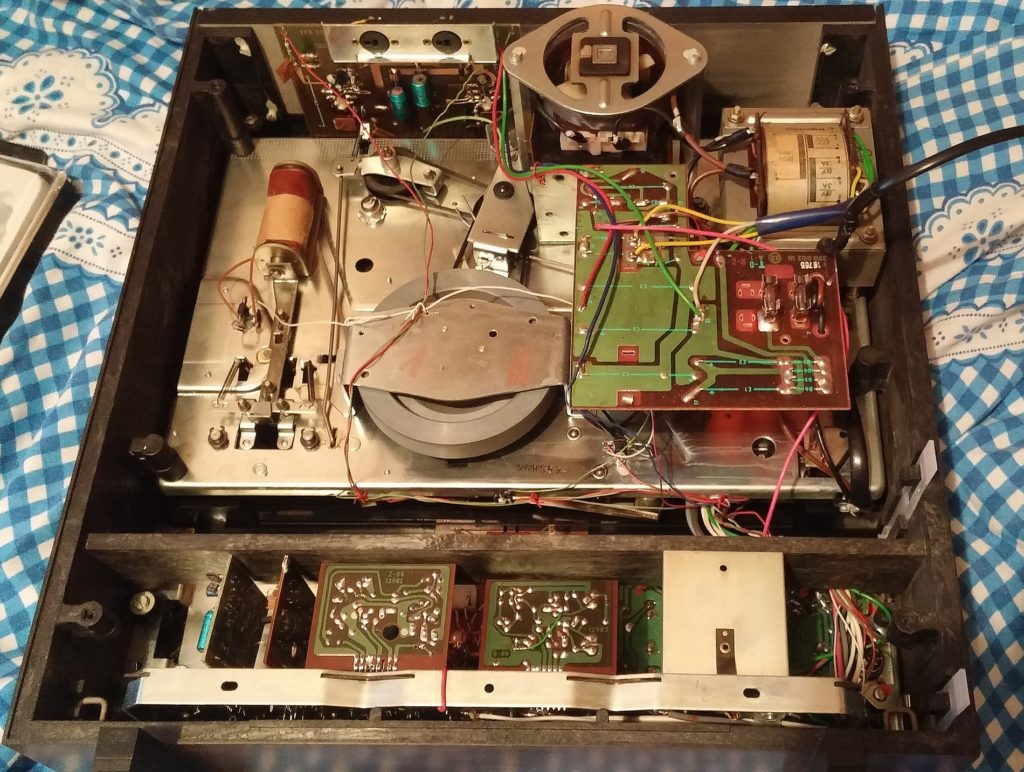 Back view, with the cover off.

The whole rig is now of a modular construction. Access to the main parts is gained easily – the whole chassis is mounted on a hinge, which can be opened outwards like a door. All the easily serviceable circuit boards (e.g. signal preamplifiers for each track, or the HF erase head oscillator) are mounted on a mainboard and can be removed without tools. They can be freely interchanged between the channels (tracks), or between other machines, when repairing.  And apart from the end-stage speaker amplifier, which is based on two MDA2020s (a clone of the TDA2020) for each speaker, all of the electronics is discrete – there are no microchips present. 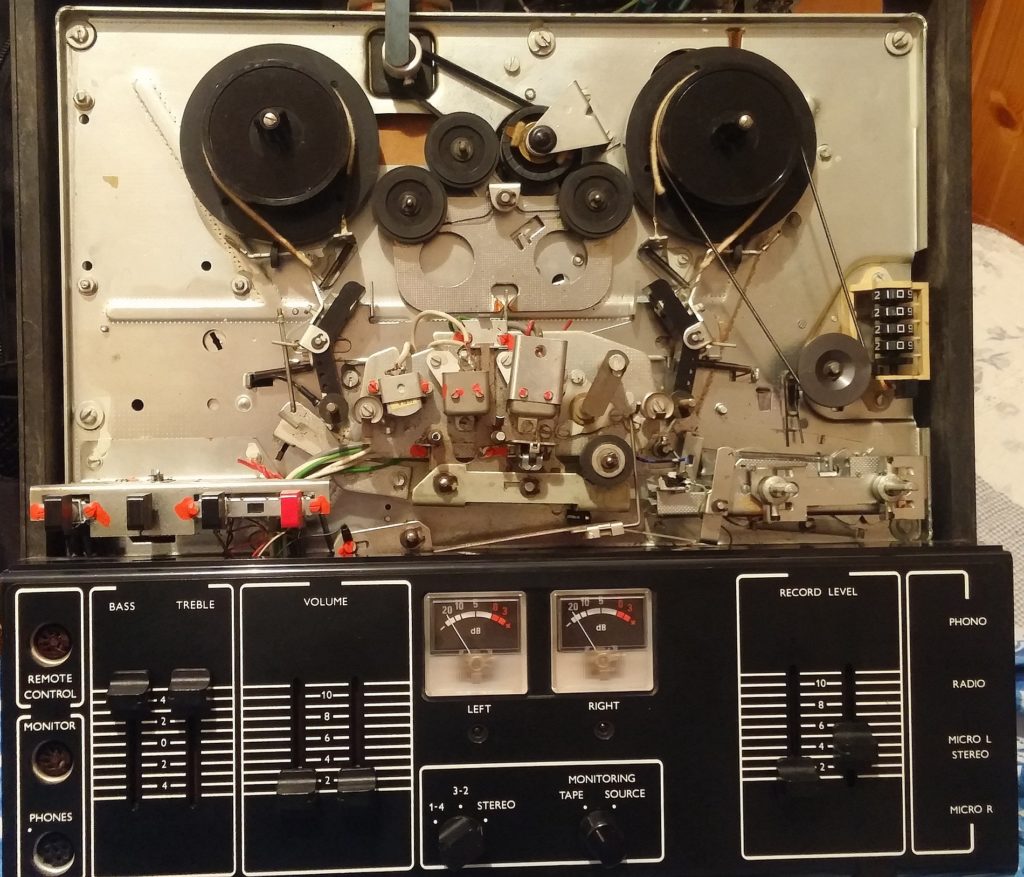 With the whole tape transport exposed

The mechanical construction of this machine is a little bit similar to the B90: the AC motor spins a central pulley system that has 2 belts, transferring power to the capstan-flywheel and to the take-up reel friction clutch; a thin metallic string connects the take-up reel with a revolution counter. The top of said pulley, is used in conjunction with that dreaded swinging arm assembly of four idler wheels, used to rewind the tape, that are still difficult to set up properly. Especially as the rubber lining of the small idler wheels progressively wears out.
The brakes are now vastly improved, however. Felt pads are still used to adjust tape tension of the reels, but they are now glued on much thicker copper strips, that are spun over each reel (instead of thin wires, as used in the B90). In addition, there are 2 lever-style brakes with thick rubber pieces, that get pushed in as soon as you wish to stop the rewind process, halting the reels instantly.
While certainly being an advancement over the original design, it still has its own mind like a dumb blonde; except for the fact that it’s also dependent on the outside temperature, humidity and perhaps the current constellation of stars. But now at least it’s not a big PITA to get the thing to stop its reels after rewinding, instantly – without stretching or ripping the tape – and also without affecting playback wow and flutter, regardless of how much tape there is, on each reel. 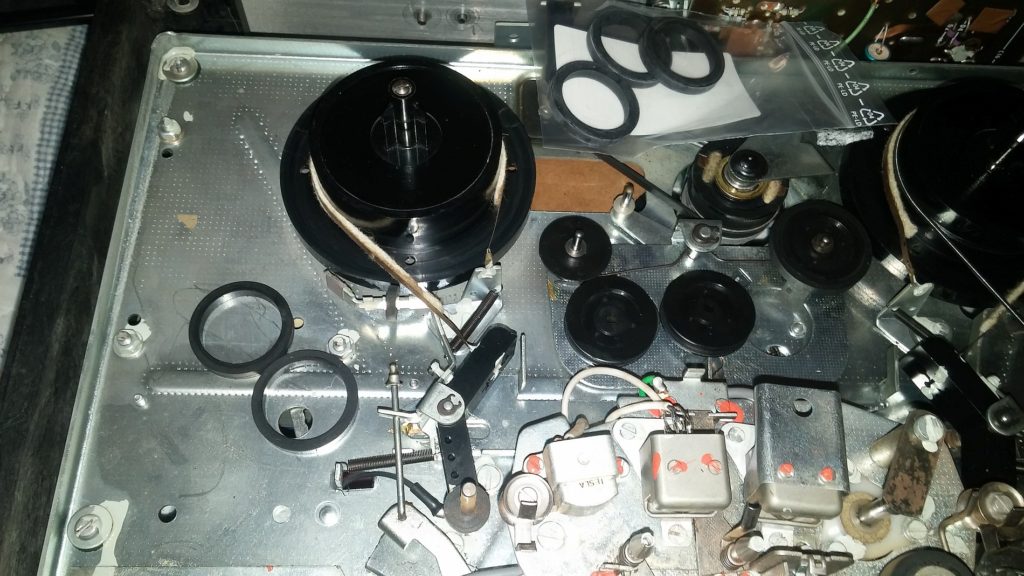 I’ve got this model from a guy who already did a partial re-cap of the electrolytics inside. He also mentioned swapping a cracked flywheel out of the machine for a new one. This was a long-term problem of zinc-aluminum alloy Tesla used in its range of tape recorders and especially record players, that was most likely caused by an improper annealing process.
Other than that, this machine was cared upon – the plastic front panel is almost pristine, the wooden casing is still nice and there are minimum scratches on the plexiglass dust cover. I didn’t touch the heads in this rig – the machine shows no evidence of harsh treatment, and there’s still original paint on the screws. Without a special tape, recorded on professional equipment, tinkering with the calibration and azimuth would most likely render the machine sounding just outright ugly on playback or recording.  However, I had to degauss the tape transport, and then, adjust the tape bias and recording current of the inner track (right channel) a bit. Afterwards, on a recording test, with a speed of 19cm/s and a quality Agfa tape, I could not distinguish between monitoring the original 320kbps FLAC, and the tape output, using Beyerdynamic headphones connected directly to the machine.

The tape recorder uses DIN connectors for almost everything, it was kind of the “USB” standard of those days, when it came to audio. There are 5 inputs on the front panel: two mono microphones for each track (or one stereo microphone), phono input for a crystal pickup, receiver/line level input/output and an interface for a remotely-controlled pause button. Output is possible through the MONITOR line-out connector, there’s also a special 5-pin DIN headphones connector (with those five pins arranged like in a dice), and also on the back panel, which contains two 10 watt RMS outputs for two 4-ohm speakers. Except for the MONITOR line-out output, the sound can be also modified using the bass and treble fader pots.
Compared with the predecessors of the B70 series, the recording level setting is done manually only, by means of 2 fader pots. They’ve ditched the JFET automatic level control circuit, that was present in the B90, B73, B70(0) and others.
This tape recorder was also produced under the model of B116, which  was advertised as a Hi-Fi “tape deck”. It was almost identical to this machine, but it lacked the speaker power amplifier stage, and thus was a little bit lighter. 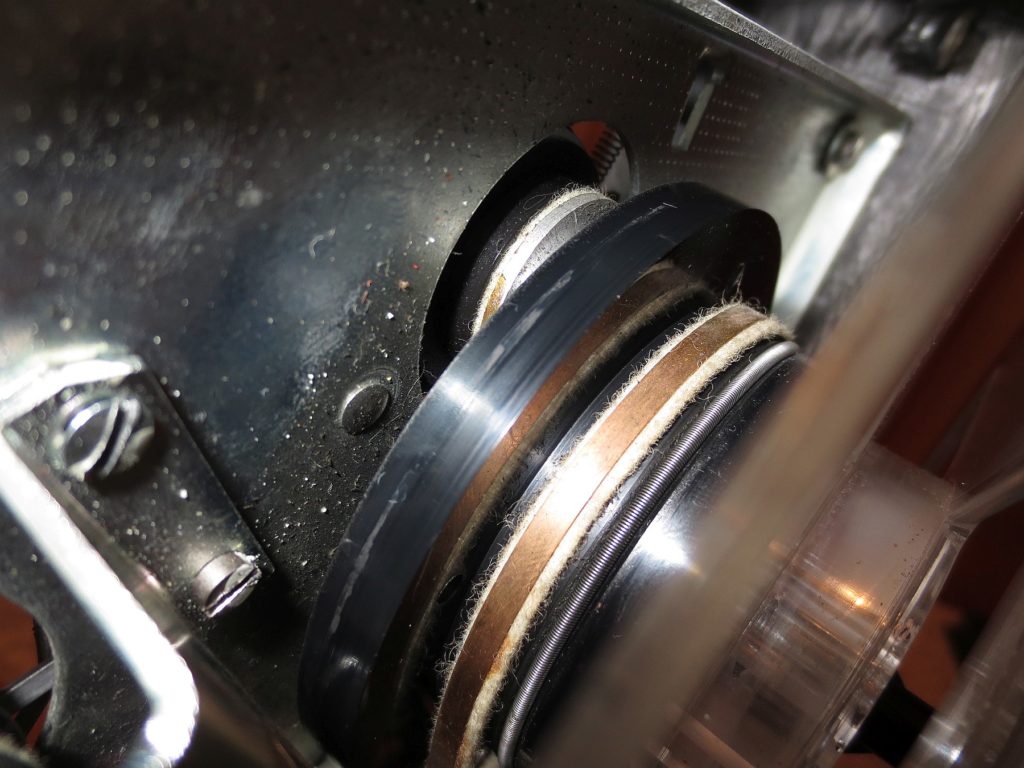 One of the good improvements of this machine, behind the original B70 series, is a very easy access to the heads and the main tape transport, for cleaning or general setup, without having to disassemble the whole front panel. The cavity, in which the tape is put through while playing, can be removed for cleaning without tools; the same for the top cover of the heads.
A common problem of all consumer-level TESLA reel machines were ludicrously slow VU meters. This model actually provides a separate “amplifier circuit” module just for the two VU meters, where the time constant can be adjusted by tinkering with the timebase capacitors, for a much faster rise and fall time (comparable to LED indicators falling down).
There are also 2 red LEDs under the VU meters. However, they are not used to indicate peaks, but rather on which track is the recording function active, mono or stereo.
I did eventually replace the 2 incandescent bulb backlight of the meters with white LEDs, as the light bulb sockets were oxidised inside, and the backlight was sometimes intermittent. You might call this a heresy 🙂 but it looks nicer, and also provides a lesser current draw, with a nice “fade out” effect when the machine is shut off. 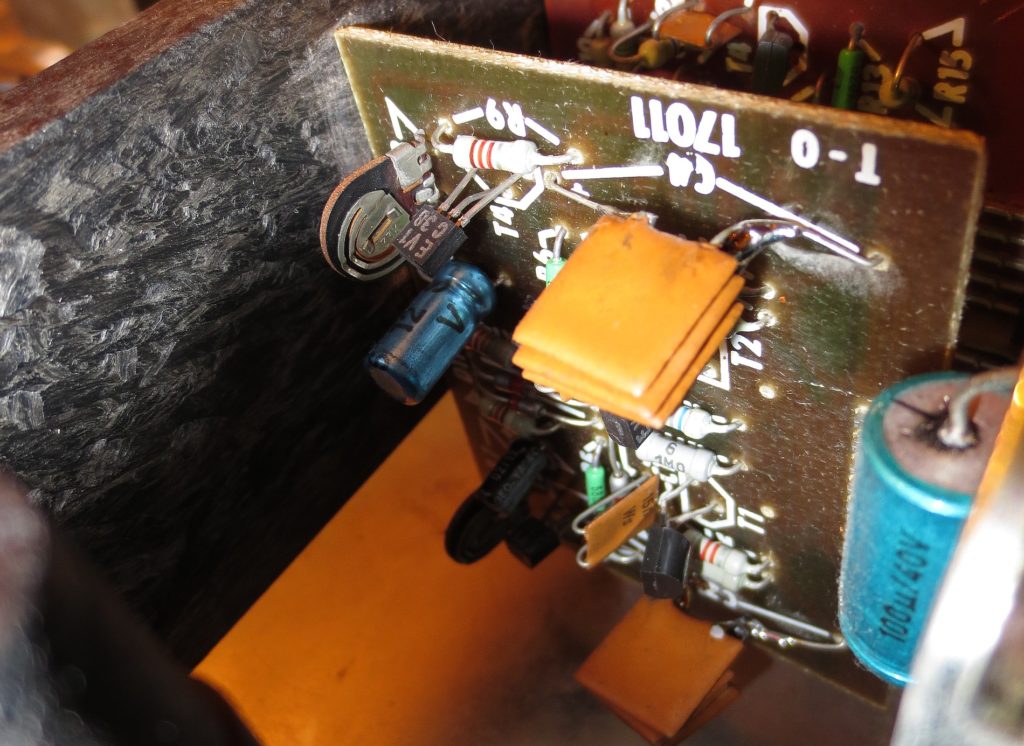 Adjusting time base of the VU meters for a faster fall time (note the paralleled ceramics).

The autostop function had been improved too – unlike the B90 and the predecessor models, that put the conductive strip of the tape in series with the electromagnet actuator, burning it out after some time. There’s now a small PNP transistor circuit that sends a pulse to the coil of the actuator, as soon as its base is connected to ground by the tape passing through. This very same actuator also stops the playback or rewind, in case the tape loses tension (due to unspooling or damage to it), thus preventing entanglement inside the machine.
I did add a little feedback circuit to improve the sensitivity of this circuit, so it also stops the tape while rewinding, and thus prevents it from unspooling from the reels, if the brakes are set up properly.

In the end, even though the machine was already of an outdated construction when it came out, sharing some quirks from the B70 series… From the 3 reel machines made by TESLA I’ve owned, I have to say this one is, by far, my favorite. It cannot be compared with a Wollensak, ReVox or even STUDER, but after refurbishing the mechanical stuff and performing a few hacks to make it more responsive, I like it for what it is!

And after I got the tape biasing and recording current of the inner track to be equal in sound fidelity and volume as with the outer track (this was not an alignment problem thankfully), I’ve decided to perform a recording test onto an AGFA PE46 HiFi Low-Noise tape. The recording was provided by Techmoan and comes from a “Capitol Stereo” demo tape: