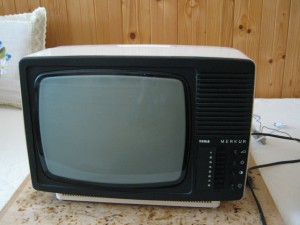 Description: A portable black and white TV.
Manufacturer: TESLA Orava, k.p. Nižná
Made in year(s): 1982-1989
Country of origin: Czechoslovakia
Status: Replaced it with a Merkur II

Another TESLA piece – the Merkur 4160AB – was a portable analog black and white television receiver with a 31cm CRT screen. It had 8 manual-tuned station presets, all of which were freely tunable by hand, through the now-obsolete 5 “television bands” (1st to 3rd being VHF channels, 4th and 5th UHF). Supports both OIRT and CCIR sound frequency offsets, 6.5 and 5.5 megahertz respectively.  The TV provided tape recorder output, a strange headphones connector, an external antenna connector and also an integrated whip antenna. Draws 40 watts and can also be readily powered up from a 12V battery. The newer models such as “Merkur 2” had a composite video input for 8-bit microcomputers, also made by the Czechoslovak TESLA.

I have obtained my particular model from a scrapyard, momentarily saving it from certain destruction it would have met. Aside from being dirty and the high voltage inverter a bit squeaky when it ran, it was still working in perfect state and had no major quirks – apart from a broken whip antenna, which wasn’t a problem really.
I have used the telly more like an oldschool decoration than for watching, although I did switch it on a couple of times, after my morning alarm clock rang and I had been too lazy to switch on the big modern LCD in the living room…

I got rid of this thing in December 2011, because I had no practical use of it after all the analog terrestrial TV transmission ceased. However, in 2018, I’ve managed to get my hands on the “improved” successor version, the Merkur 2 4162AB. This thing – to this date – has all the original seals on the screws from the factory, with the whip antenna intact and with an optional rear composite video input. It is externally very similar with its predecessor – just the front panel differs a bit, plus the presence of a composite video DIN connector in the back.

Together with the green screen based Tesla PMD-60.1, this thing can also be used as a PAL-compliant monochrome monitor for the first Slovak personal microcomputer; the Tesla PMD-85. 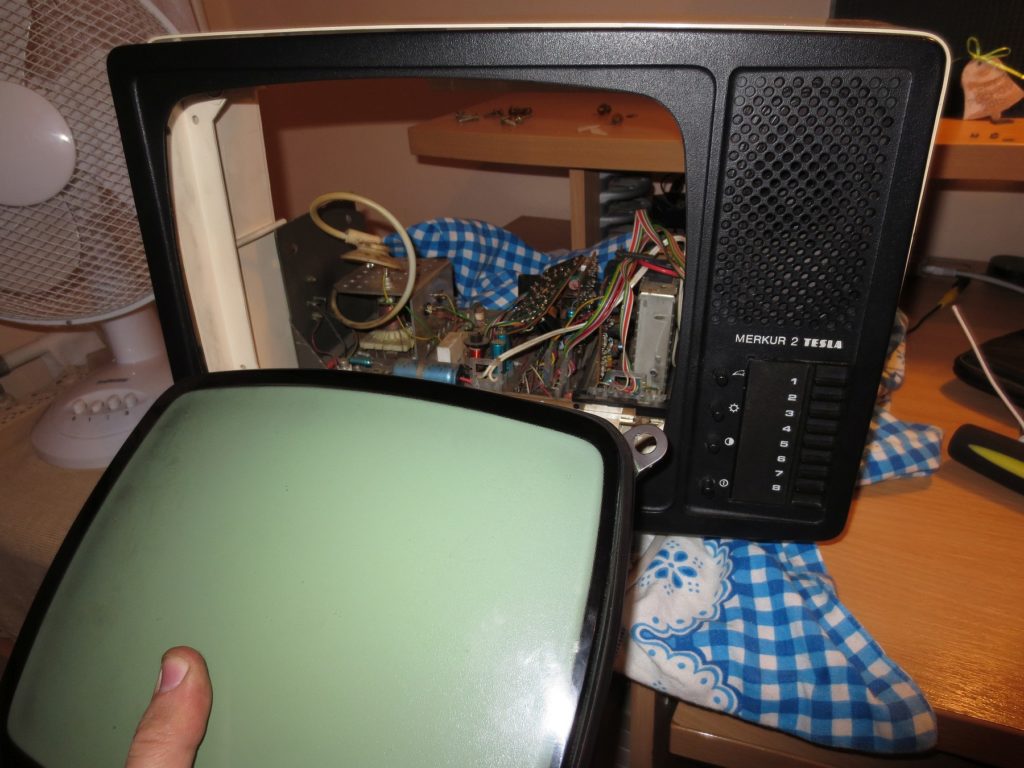 One of the fun modifications I’ve done to the TV, was to set the regular white-phosphor-based monochrome screen aside, and to install in a green screen CRT from the PMD-60.1 monitor. And since the TV can still be tuned into the obsolete first VHF bands, which are now currently occupied by analog FM radios, the TV can be made to receive analog FM broadcast, with the TV static jumping into the modulation (albeit the sound has a different bandwidth, so the reception is distorted):